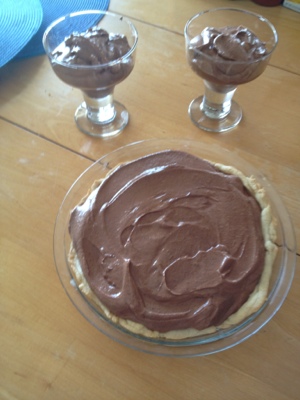 In the post related to this, I mentioned that I had wanted a very cherry chocolate pie taste, but it did not happen. However, Bob, Mom and Dad all really liked this version of the chocolate pie.  It is very light, almost mousse like and has a slight tart taste.  Not the cherry taste I was after, but apparently a very good pie.

So the recipe … I adapted this from the America’s Test Kitchen cookbook.  By adapt, I mean I started with the recipe and then completely changed it.  So before I totally forget what I did, here is the recipe:

Toss all the above into a food processor.  Mix until combined.  pour onto plastic wrap, mush together to form a ball, wrap in said plastic wrap and toss in the fridge for an hour or so (it lasts a good week, so no hurry).

When ready to bake – roll out to desired thickness and bake at 400 degrees for 12-15 minutes.  You know when it is done by the pretty browned color of the crust.

Use weights and prick the bottom of the crust to ensure it stays flat.

Using a double boiler (or mixing bowl over a pot with water in the bottom) on medium heat, beat eggs, sugar and water with a mixer until the mix is very light and fluffy and the temperature reaches 160 degrees.  This can take 10-15 minutes, so be patient.

Remove the mix from the heat and continue whipping until it reaches room temperature.  Again, this takes 5-10 minutes, so be patient.

Once the mix is at temperature, add melted chocolate and cherry puree and beat until fully incorporated.

Beat the butter in, one piece at a time until fully incorporated.

Fold in the whipped cream (do not use a mixer for this – use a plastic turner or scraper to get a good folding action) until no streaks remain.

Pour into cooled pie crust and chill for at least two hours.

That’s it. The pie is a little of a pain to make, but it goes over really, really well!