The one thing we did plan (aside from where to stay and one dinner at the California Grill) was the Wild Africa Trek. We’ve done a few Disney tours and really enjoyed ourselves on them. They offer a slightly different perspective on the whole operation and for someone who goes to Disney just to go […] 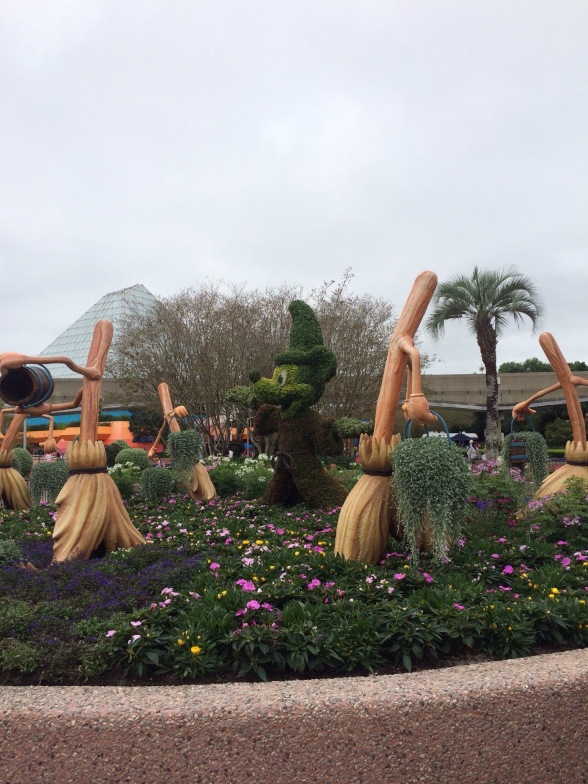 I have this thing about planning. It’s a minor compulsion. I don’t like not having plans. I don’t need everything planned, but I do need a basic plan or I feel very off kilter. So with Spring Break here and Bob taking a few days off, we decided to do a mini vacation in Disney. We had one day planned (more on that in the next post) but the first day was no plan. No dinner reservations, no set schedule, no real idea of what we would do. 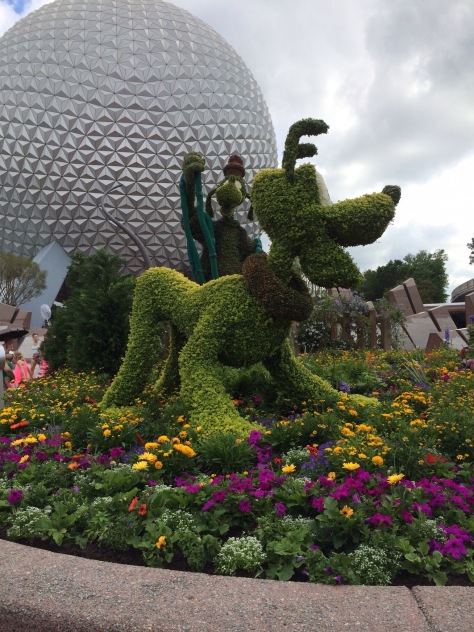 The Epcot Flower and Garden Festival  started and so we decided to head there. They added food stands, similar to the Food and Wine Festival, and we decided to just wander there a bit. We grabbed a bite to eat or two. 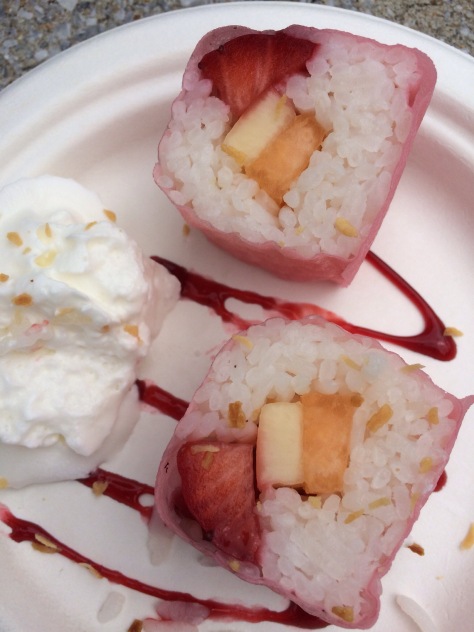 yes, that is strawberry sushi. It was a little odd, but not bad and something different.  It was the prettiest dish I ate that day.

But we wandered and took in a ride or two and saw all the flower displays and the topiary. 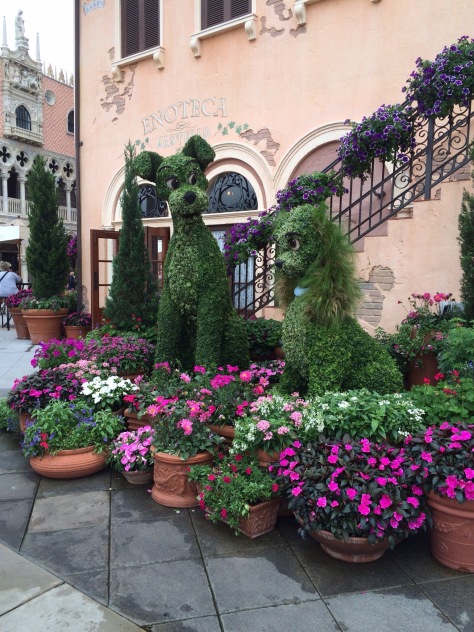 I find topiary weird. Bushes cut into shapes that are decidely not tree or bush like shapes tends to weird me out. Somehow Disney does it, and with a few exceptions, I think they are georgous. 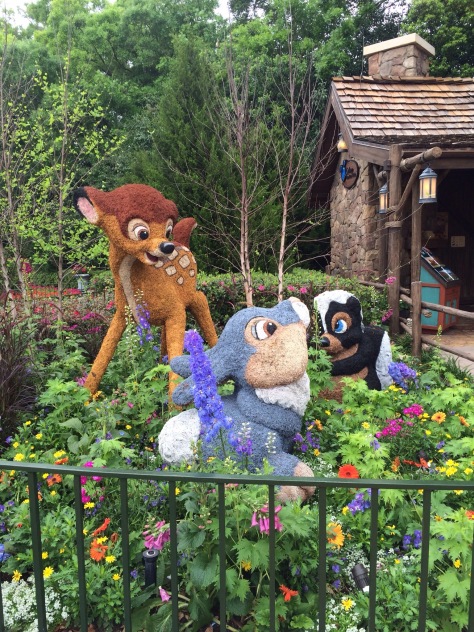 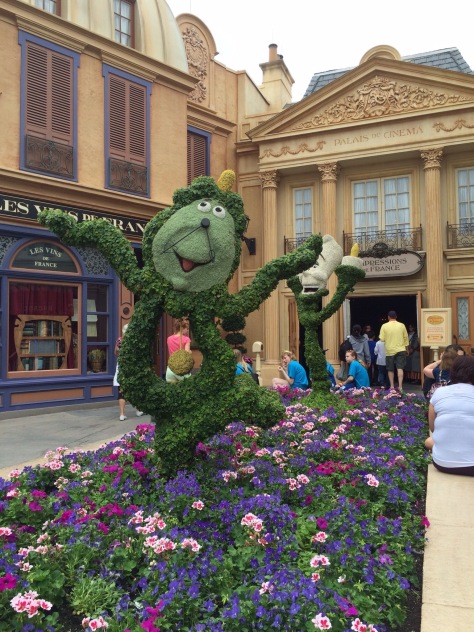 I think it is the addition of faces that make these ok. Yes, they are plants, but they look like something familiar. As much as I love Cinderella, however, the lack of eyes is a little creepy. 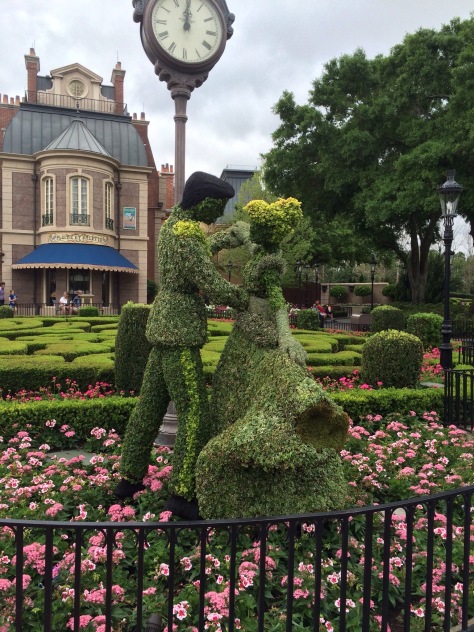 It’s pretty, but kind of creepy.

But is is about the lack of plan. And we did ok … For a while. At one point I decided I needed a bit more of a plan so we made dinner reservations. I was much, much happier.  More settled. I tried the no plan thing. I didn’t like it. It’s like the topiary with no faces, you can do it, but it just doesn’t work for me. 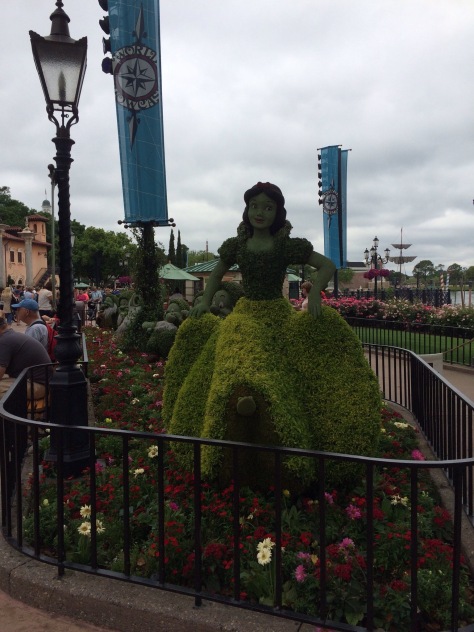 Part two of the trip – the part that was planned – next. 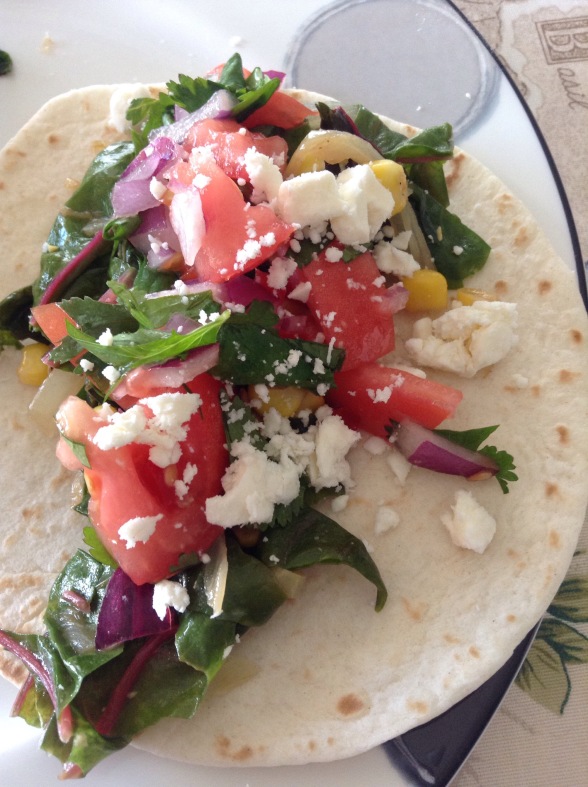 I debated posting this. Seriously debated. Not because I wasn’t incredibly happy with the results, but because of how I came across this recipe. At the risk of being mocked for being a left leaning bleeding heart liberal, here it is. 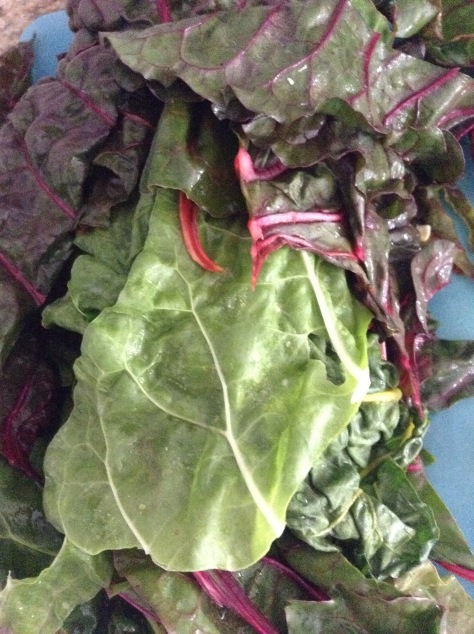 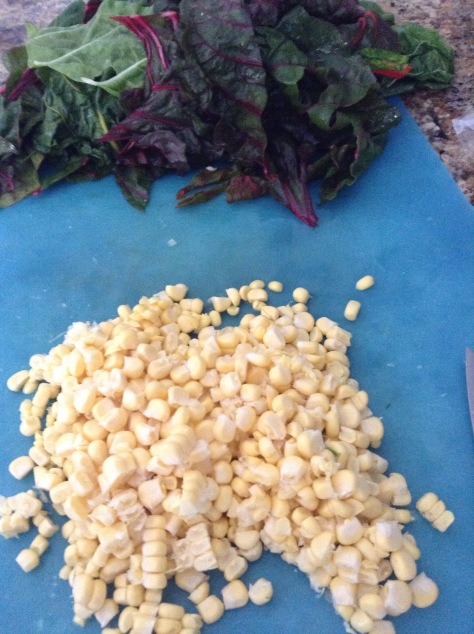 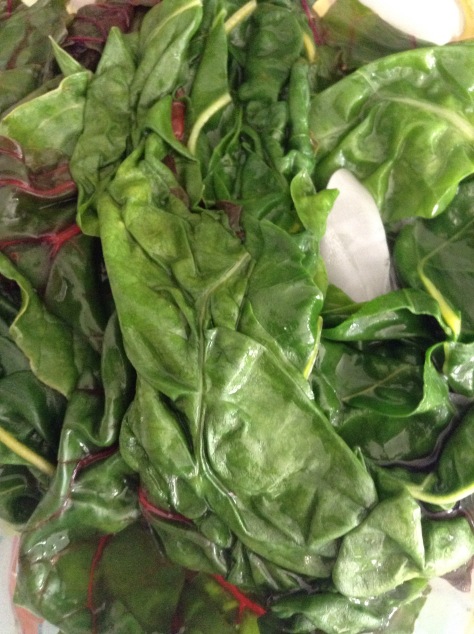 I blanched the chard in boiling water for a minute then transferred it to an ice water bath. While this cooled, I heated oil in a pan and added the onions. While the onions cooked I made the salsa, but I’ll get to that. Add firm and garlic to the onions and cook for a few minutes. ﻿ 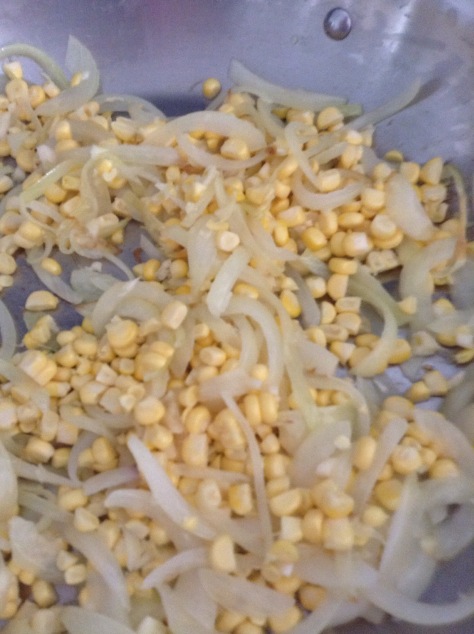 While this cooked, I drained, squeezed and chopped the chard. Once the corn and onion was cooked, I added the chard and seasoned everything with salt and pepper. A minute or two later, it is all done. ﻿ 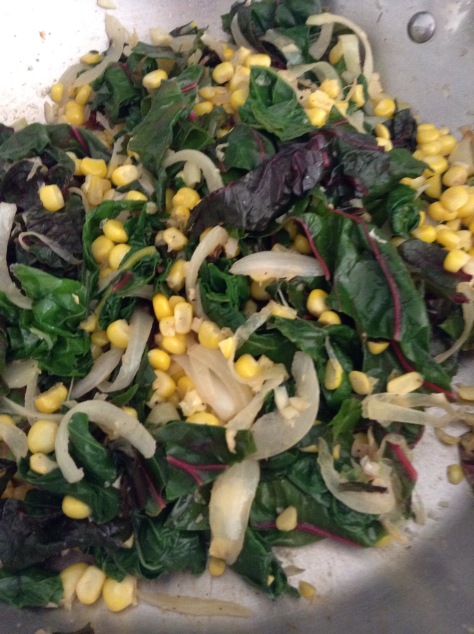 Salsa. I wanted to use a Rick Bayless cooked salsa recipe, but I didn’t have the chills. So … One plum tomato, a chunk of red onion, a bit of red jalapeño (no seeds) and some cilantro leaves. Todd everything with salt and a squeeze of lime juice and let marinade in the fridge until everything is done. ﻿ 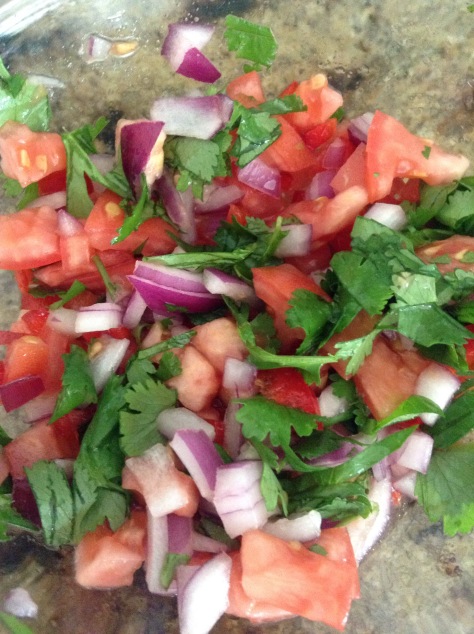 The original recipe calls for corn tortillas, but honestly, I prefer the flour ones. I know they are not as good for you, but I just really don’t like the texture of corn tortillas. 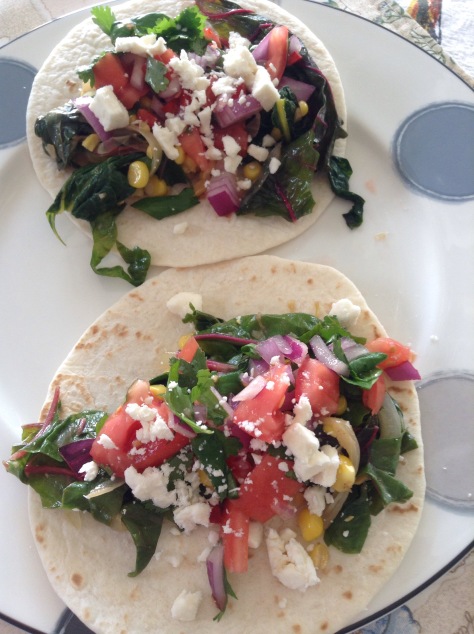 Bob liked these way better than my quinoa experiment yesterday and I have to admit, I did too. It was colorful, flavorful, had great texture and was filling. So yes, the NY Times Cooking section had a great recipe. A vegetarian taco recipe. You may mock, but you should try these. 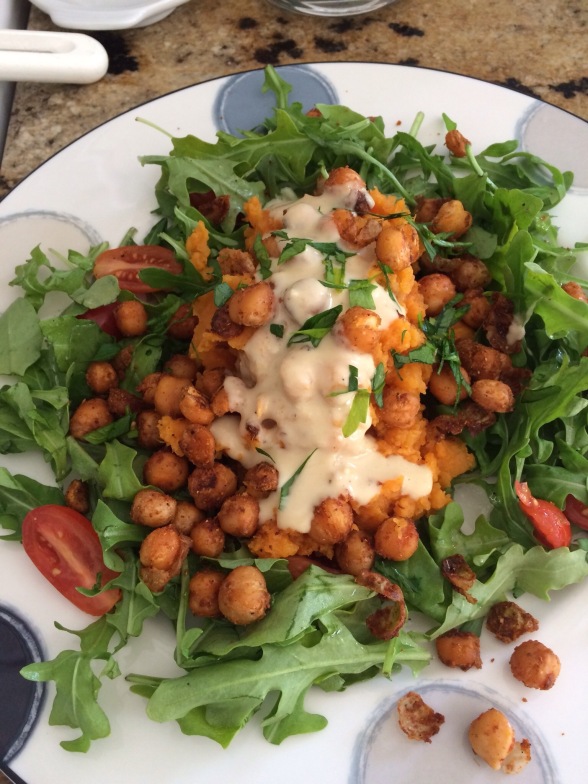 I’m not sure why, but I’ve been exhausted lately. I fell asleep on the couch at 8 one night and don’t remember much except Bob waking me up to go to bed around ten. The other days I haven’t stayed up much later and this is before the time change happened. 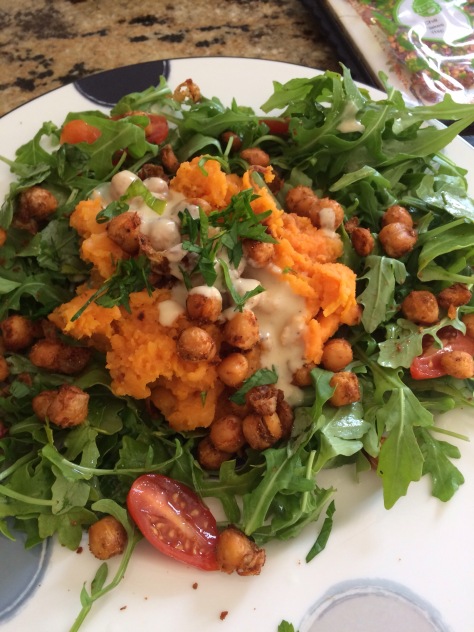 But this is about food. We are still going with our Hello Fresh boxes – it makes thinking about dinner easier for a good portion of the week. (Did skip this week, so I will hopefully have an experiment or two to post.) I generally don’t include the box dinners, but this one I had to. It was that good and I am putting it in the rotation.

I use to hate sweet potatoes. Or at least I thought I did. Even for me, the candy, cookie and cake loving me, they were too sweet and had a weird …. something. Turns out it isn’t the potato I dislike, it’s the toppings they are generally cooked with. Sweet potatoes are sweet. They don’t need more sweet in the form of brown sugar, maple syrup or marshmallows.

Cut sweet potato lengthwise. Brush with olive oil and season with salt and pepper. Place cut side down on baking sheet (leave room for chickpeas) and roast for about 30-35 minutes.

Toss the chick peas in a teaspoon olive oil, cumin, coriander and paprika. When the potatoes have been cooking for ten minutes, add the chickpeas.  Spread to a single layer. Cook for 20-25 minutes, tossing once during cooking.

Mix hummus, lemon juice and a little salt and pepper. Add about 1 teaspoon water and mix to a thin-ish consistency.

Once the potatoes are cooked, scoop out the insides and mash with a fork. Add a touch of salt and pepper if desired. Scoop into the middle of a plate and ring with arugula and tomatoes. Top with chickpeas and the hummus dressing. I started with the dressing just in the potato, but ended up using it as a dressing on the arugula too. Top with parsley.

I wasn’t sure if this would fill me up, but it did. There is a lot going on and between the potato and the chickpeas it is pretty filling. And the lemon- hummus dressing may be my new favorite. It may replace the cilantro tahini sauce. 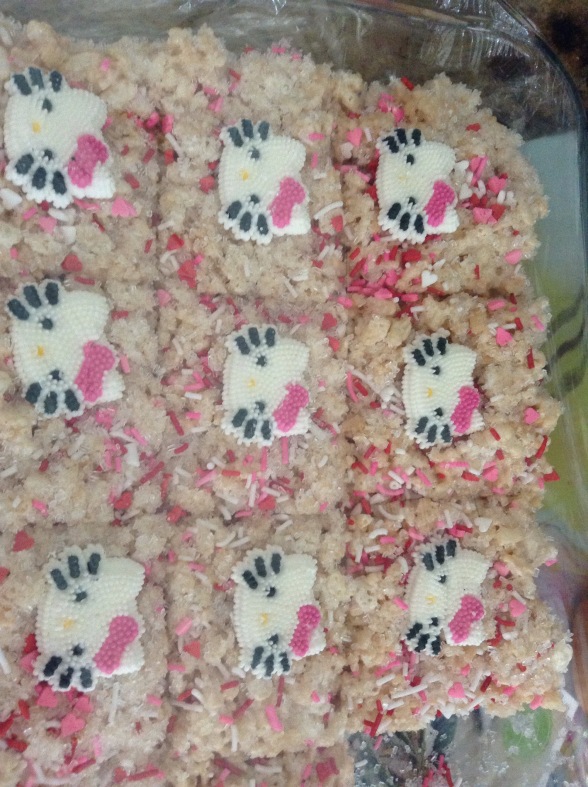 In general I think I’m pretty lucky. I’m pretty smart, have a good job that lets me support myself, have a nice home complete with the wonderful husband and adorable furry creatures. I have an amazing family, from parents to sister to extended family and in-laws. I kind of hit the jackpot in all of it. So while I don’t take first class vacations or fly on private jets, I wouldn’t trade what I do have for that lifestyle. 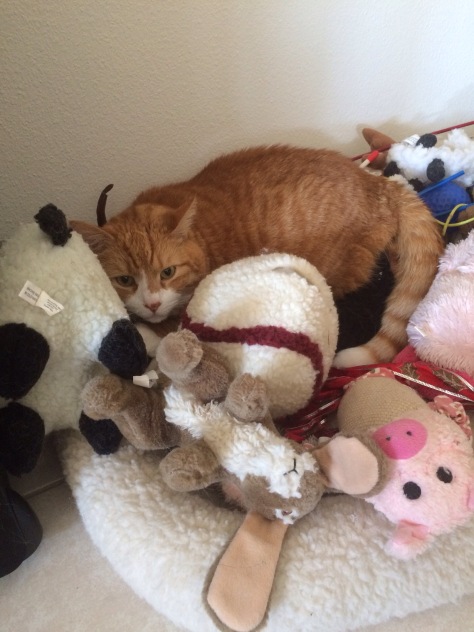 With all of this in mind, I do have to say I was spoiled for my birthday. I’m not a huge celebrate my birthday person and use it more of an excuse for a nice dinner out but this year everyone went out of their way to make turning 40 special. 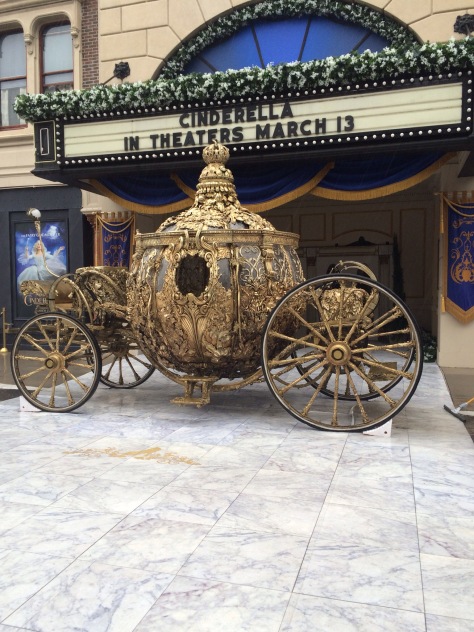 We decided to head up to Disney with the thought of wandering around Epcot then doing dinner at Ohana. We are slowly working our way through all the restaurants in the hotels at Disney﻿ And Ohana is one of the last we need to do.  We changed the wandering plans when I learned that the carriage from the Cinderella movie was at Hollywood Studios. Bob braved the rain with me so I could see it in person. It was incredible. We couldn’t go inside it because of the rain, but we were able to get some good views and pictures of it without and one around. One definite advantage to the rain. ﻿ 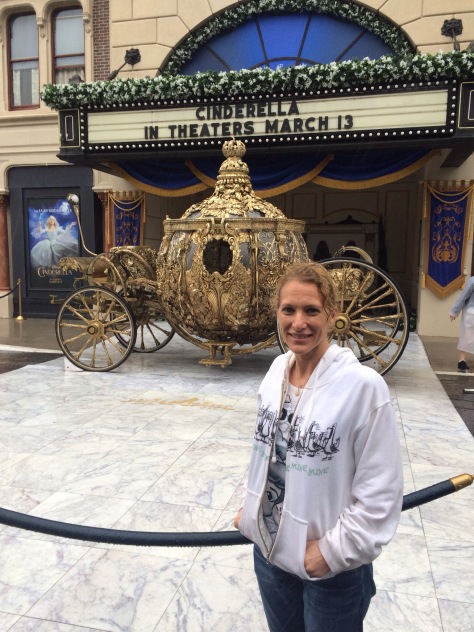 We decided to eat lunch in Hollywood Stuidos since dinner wasn’t until late we found a great  Italain place inside the park.  Bob had pasta  and I had a great pesto flatbread. ﻿ 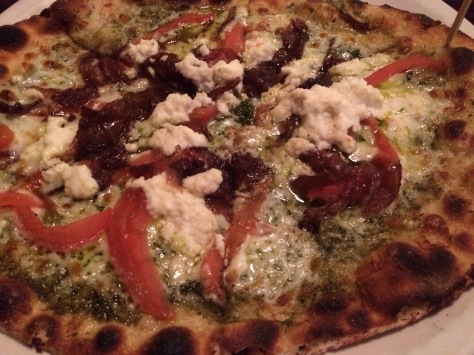 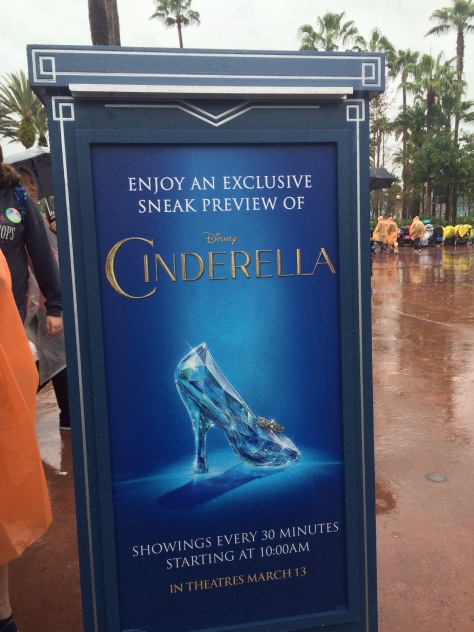 ﻿I also got to see an extended preview of Cinderella. It looks fun. And true to the original story, so I’m excited about it. After the preview we headed back to the hotel to thaw before dinner.

Val and Bill drove up to have dinner with us . It was so great to see them.  Val even made me Hello Kitty rice crispie treats and Ed and Erin sent along the cutest cake .﻿ 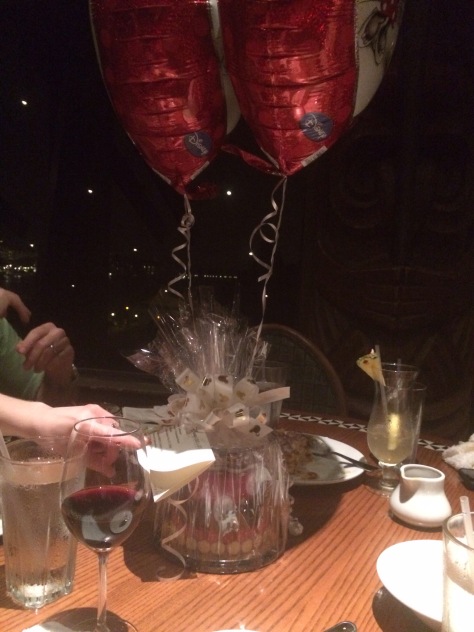 ﻿This was my second birthday cake since the girls at work did up a cake for me the day before . ﻿ 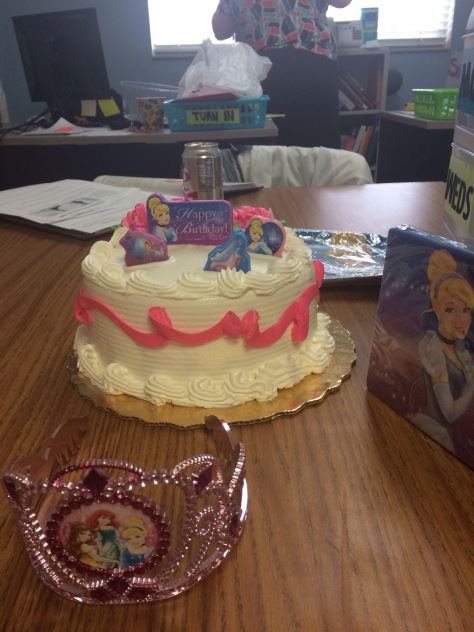 ﻿﻿Yes, it is well known that I love Cinderella.

So I was able to go away for the weekend because Mom watched the pets and Bob indulged my six year old self. I work with awesome people and have the best family and friends out there. I am truest spoiled. … Oh and Dad, thank you for the flowers  they are one of my favorites. 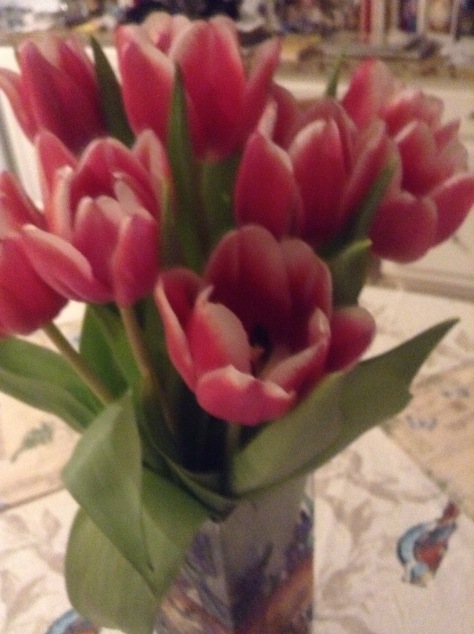