We took Arthas to the vet not that long ago. He was a little early for his annual check-up and shots, but we wanted to ask about a few things, mostly related to his food and weight. We have been trying, unsuccessfully, to help Arthas lose weight since we brought him home. He has exercised, had his food portion controlled and eats green beans for treats. Somehow, none of that worked.

We kind of wondered if he was just stocky. He has a deep chest area and he has more energy than he did a few months ago, so maybe the weight wasn’t an issue? No, weight is definitely an issue and the vet was pretty adamant that he needed to lose a few pounds.

So.  How to do this? Arthas isn’t a dog I can walk for multiple miles every day. He will simply refuse to go for a walk if he doesn’t want to go, so that strategy isn’t going to work. We don’t want to cut back on his food too much because then he just gets into trouble looking for more. But we have to do something.

The plan: transition Arthas to a weight loss food instead of a weight management food. Decrease the wet food he gets and up the green beans if needed. Cut back on treats for anything other than after a walk and don’t let him clean the cat plates unless they are pretty much empty. (This is where I think we will get the biggest calorie discount, personally. Leia has a habit of leaving a lot of food and between Tigger and Arthas, the boys eat a little too well when she is fussy. Both had gained weight and need to lost a few pounds.) 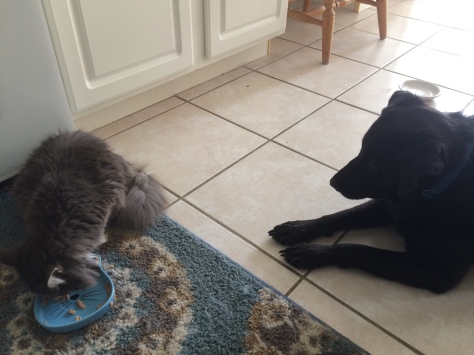 To help in this endeavor, I switched Arthas to the weight loss food from Bogo Bowl. The shelter told us about this food when we adopted Arthas, and I liked the mission so we decided to try them. He loves the food; of course he loves everything except kale, but that is neither here nor there. Sarah was great when I asked about switching out food, and she specifically asked if we had enough for the transition. A good product will get me to buy from a company, but great customer service will keep me going back.

The food came late last week and I put off the switch while company was in town. (Did I mention that Arthas *loves* his Aunt Val and Uncle Bill?  Loves them.) Tonight, I set about to plot the transition, and portion out the food so there is no more sneaking a bite as I scoop out the breakfast, or overfeeding him because we feel bad for the boy. … I may have gone a little overboard.

I have twenty-five days of food portioned out, AM and PM, with each day labeled. 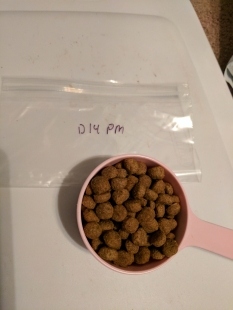 This way, there is no guessing about how much of each food to give Arthas, and we won’t have any digestive issues as he moves to the new food. Digestive issues are bad and we want to avoid them at all costs. Each bag is labeled with the day and the time so it is a no thought required endeavor to feed the boy. This does still leave the afternoon snack, but Bob stocked up on canned green beans and we can give him mostly green beans with a little wet food and he seems perfectly happy. I think he really just wants something, and he doesn’t really care what it is.

I am hopeful that we can get his weight down to something the vet and we can both be happy with. We are not going for skinny, and I refuse to starve the boy (he had a rough enough start, he gets to be spoiled now), but I do want him healthy. So we will try to lose a little weight, maybe get him under 50 pounds, and going for longer walks than he does now. If this works, we may have to work on Tigger next. 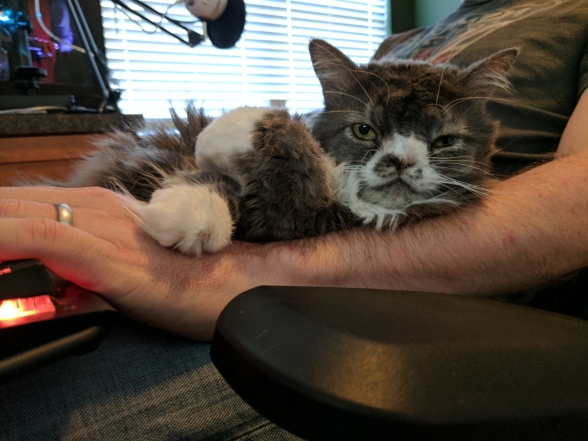 Ok, I’ll try this again. Apparently I did write, save and publish this once, but then it disappeared. Sigh. Technology is wonderful when it works.

So … As some may know, Leia was not enamored with Arthas when we brought him home. My sweet kitty was less than sweet with Arthas. If I’m going to anthropomorphize a bit, I’d say she was still in mourning for Jessie and was not happy about the new addition. Maybe she was worried about her place in the house, but really, I think she was just mad.

That first month was rough. We weren’t sure we were going to be able to keep Arthas and that tore me up because he is such a sweet dog. Well, he is a sweet dog with people. Given his background I get why he doesn’t like other dogs, but cats … my cats … well, he had to learn. Leia didn’t help but once she figured out he wasn’t going anywhere, and she wasn’t going anywhere, she decided he would love her. He would be her friend whether he liked it or not. 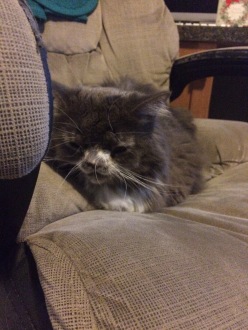 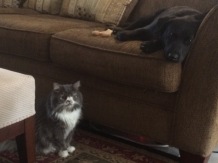 It started simply enough. Stalk the dog. Follow him from room to room, keeping a safe distance. Make him aware of you, and make sure he always knows you are there. Slowly, get closer. Just a little closer – enter the danger zone. Make noise every time you go by, but keep going by. Let him know you are there, but be there. Constantly.

Next came the toys. Leia claimed each and every toy Arthas played with as her own. Sleep on them, and play with them and make sure the next time he plays with that toy it smelled like cat. 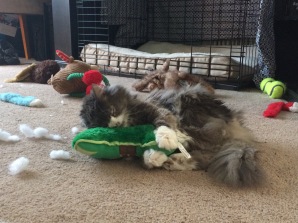 Leia moved to hanging around the food and water bowls and Arthas started getting closer to her. Surprisingly, there was never a fight about food; they seemed to instinctively know that they would all get fed and it was not worth trying to claim more. 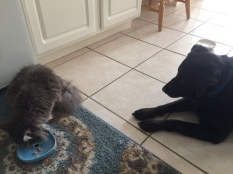 And finally, the other night, Leia won. Arthas does not like animals touching him. He gets a little freaked out by the cats brushing up against him, but he has learned not to respond if they pass by and brush against him. Mostly. We do still occasionally hear a growl, but that’s it. This, however, was different.

Leia fell asleep on Arthur’s foot. This may seem like no big deal, and indeed Leia has slept on every animal and human in this house at one point or another, but Arthas was different. But he let her sleep there. There was a little growl, but Leia didn’t move and Arthas didn’t move. It was lovely.

Leia was determined that if she could not get rid of Arthas, that he would love her. He would be her best friend. She is still working on it, but I think it is safe to say, she has pretty much won at this point. And that makes me very, very happy. 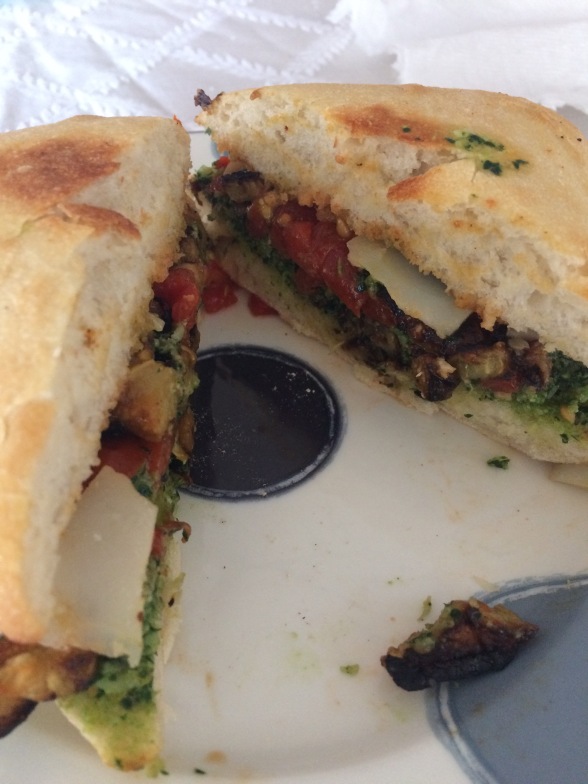 Bob and I tried a new French Cafe near us last month. This cafe has been in Sarasota for years, but only recently opened a second place closer to us. We decided to stop in one day for lunch and I had the most amazing sandwich that I decided I needed to recreate at home.

This is based on the sandwich I had at the cafe, but there are plenty of differences. I don’t have a good French baguette at home, but my grocery does incredible ciabatta bread. I like pesto, but I find kale pesto much better – something about the added peppery taste. I also have no idea how they actually made the sandwich, but I think I got the basic concept.

Roasted eggplant and tomato coated in balsamic and a little olive oil. Roasted red peppers, kale pesto and a pecorino cheese. This.  This makes a perfect sandwich. 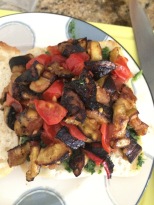 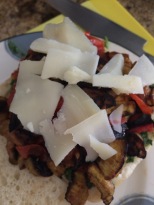 It’s not fancy and it won’t win any awards, but I could eat this for lunch as often as I eat a tomato mozzarella sandwich. For the record, that is really often.