We knew the end of August would be busy and hectic. We knew that Bob had to be away for business and I had some long days with the start of the school year. Despite this, after taking my exam for my Florida license (no idea how I did, results won’t be in for a while, but the test was nothing like the practice test the state puts out, or any of the review/study materials they publish. Given that … who knows) I decided to go look at kittens again. I figured Bob and I had been looking for a while and we didn’t come home with anyone, so we probably would not find a cat and that would be that. Well … we were wrong.

Meet Ella (on the right) and Alinea (on the left). These about three-month old kittens stole our hearts almost immediately. Ella was super outgoing and very energetic. Alinea was shy and very skittish. They played well together (they are not from the same litter). We were a little concerned about each individually, and their impact on the boys, so when Bob suggested we adopt both (yes, two was his idea) I wasn’t going to object. And I have to say, he was absolutely right.

The girls both had a rough start. Alinea was thrown from a car and had a degloved jaw and road rash on her paws and tail. Ella was found as a tiny kitten in a barn all alone – no momma cat, no siblings. These two were incredibly lucky to be rescued by a great girl who runs her own rescue organization (and she is 23!!!) and rehabilitates cats so they can be adopted. She did an incredible job with these two and we just adore them.

The boys are still adjusting. Arthas is more interested in their litter box and food than he is in them. Tigger isn’t sure about them, but he isn’t objecting to their presence. I’m hoping once everyone settles in and gets comfortable with each other, they will all get along. We know it will be a while, but it will be worth it.

Personalities are still developing but already Alinea is more outgoing than we expected. Ella is curious, but shy with the boys and she likes her alone time. It will be very interesting to see how they change as they grow up. 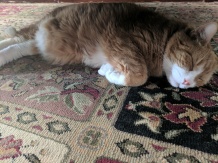 (Ella got her name because of the dark freckle like marks on her face, and the darker smudge on the other side of her nose. Every time I saw it I thought of soot, so she made me think of Cinderella, hence the name Ella.  Alinea is both the name of an amazing restaurant in Chicago, but it is also the editing symbol that indicates a new paragraph. Since she had such a rough start, we want her to have a new beginning. She also LOVES food and eats constantly and voraciously, so the name definitely fits her.)

I love summer food. Tomatoes, peaches, corn, zucchini etc. are some of my favorite foods and they are fresh during the summer. Admittedly Florida is a little challenging vegetable wise in the dog days of summer, but there are still plenty of fresh fruits and vegetables to be found.

When I saw the dark cherry tomatoes at the farmer’s market, I knew I had to make a sale out of them. The ripe peach cried out to be paired with them, so I made an herbed vinaigrette using the chives, oregano and parsley from my garden. I roasted a little corn, chopped up some manchego and tossed it all together. It was lovely. 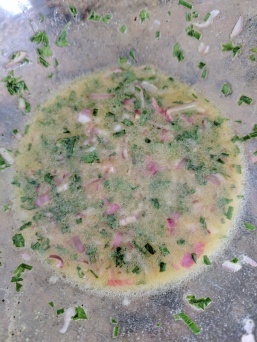 About once a quarter a group of us at work have a Friday in lunch together. We order something, pick it up and try to have a rallying lunch. One of our go-to places was Chipotle and I was pretty excited when then added a vegetarian protein. It ticked all the boxes for me – spicy, touch sweet and really filling. The lunch in tradition changed a bit this past year and we did more eat what we brought as we had lunch together, which is great for a variety of reasons, but I did somewhat miss the salad. Yes, I know Bob and I could go and get lunch or dinner one night, but I scoured the internet for for a way to make it at home and found a recipe that looked possible. I also found a copycat recipe for the chipotle-honey vinaigrette that I love on the salad. So … I decided to try it since I had a little time one weekend.

I didn’t use as much tofu as the original recipe called for, although I did make all of the sauce to cook it in. I didn’t want to have a lot left over if this didn’t work, so I just used about 7 oz. of tofu and that was enough for Bob, myself and one leftover portion. When I make this again, I will probably use one whole package of tofu so we have more leftovers. 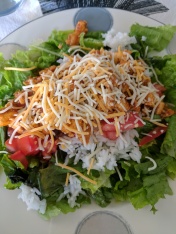 For the meal, I recreated most of the salad the way I order it. I used red leaf lettuce, rice, diced tomato, cheese, the sofritas and dressing. I was going to fry up some onion and orange pepper, but decided against it, and the corn salsa I made wasn’t good – I think the corn had a bad case of freezer burn. But the overall effect was good. Very good. Better than Bob expected good.

I will say this – going out for this is way easier than making it. It isn’t hard, but there are so many pieces to it – blistering the pepper, making the dressing, making the sofritas, making all the parts that go on to the salad … and I cheated and used pre-shredded cheese! I’ll make it again, but it will not be in the quick weeknight dinner rotation. 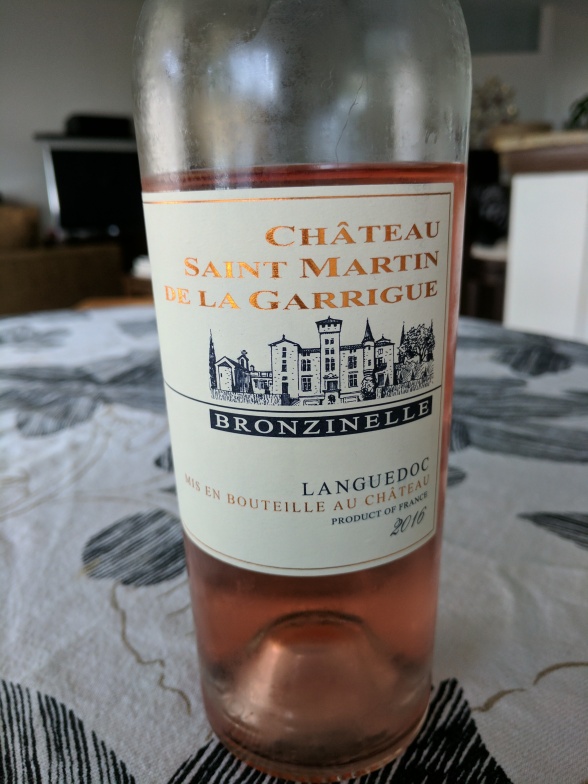