Whenever I ask Bob what he wants me to make for his birthday, he says pie. The type of pie caries – pecan, lemon, chocolate – and this year he went with key lime. I’d never made a key lime pie before so I did what I always do – read a ton of recipes, then promptly ignore them.

It seemed like the main thing I needed to do was use condensed milk, limes and eggs. Sounds easy enough, so looked at the proportions from a number of recipes and decided to try my hand at it. It worked. The pie came out light and airy with a lot of the tart lime flavor coming through. I added a whipped cream to the edge and that added a nice flavor to the pie. It was a hit and when we ate it on Mother’s Day there was none left.

For the filling – mix eggs on medium speed until light in color. Add condensed milk and continue mixing on medium high speed. Increase speed and add juice and zest of limes. When fully incorporated, add vanilla extract. Pour into pie crust and bake at 350 degrees for 17 minutes. Remove from oven and let cool. Refrigerate for at least two hours, preferably overnight.

For the cream – With an electric mixer, mix coconut sugar and cream until soft peaks form. Use a piping bag (I used a zip top bag with the bottom corner cut off) and pipe cream around the edges. 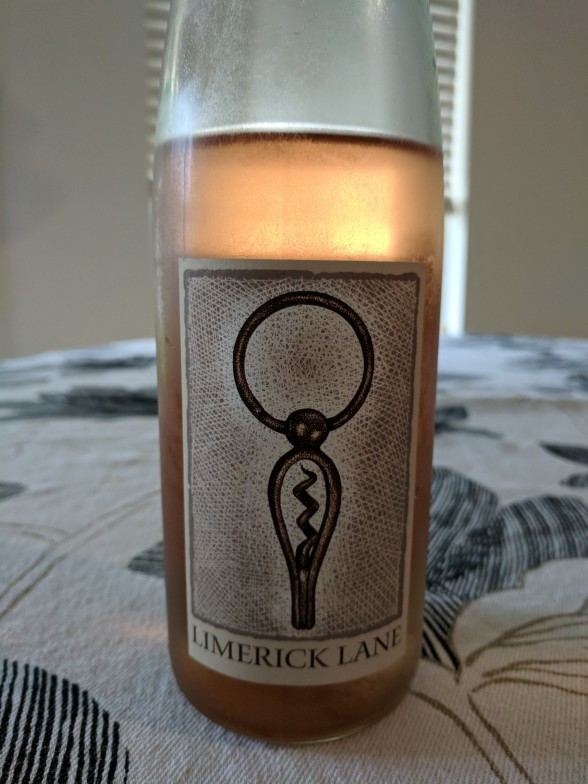 I have been accused of wanting the “broken” animals. I fell in love with the cat with no nose and the blind dog, but I don’t think it was the “broken” aspect that made me want them. It was that they were overlooked. When I think about all the animals I’ve taken home, they were all over looked or unwanted in some way. The boys in the neighborhood threw rocks at Patches because they didn’t want her around and when she followed me home, I knew I wanted to keep her safe. Jessie was ignored and then given up and she spent a lot of time in the shelter with no one wanting her. I knew the minute she nuzzled my hand she was mine. Leia was abandoned by her mother and lots of people didn’t look twice at her because she had the nose issue, but she purred in my arms the first time I saw her and that was it – she was mine. Gracie and Tigger were a little more normal – three and a half weeks old when I first saw them and Gracie was instant love. Arthas spent five months in a shelter and I don’t think the volunteer showing me the dogs that day expected me to do more than glance at him – but he walked up to me and didn’t bark and he just looked at me (ok, he can’t see but he does look at you) and I wanted him. Ella was abandoned by her mother and someone threw Alinea from a car. Talk about overlooked and unwanted.

But … they are fantastic and the best pets I could ask for. Arthas has learned the cats are not going to hurt him – he is very good with them now and they just adore him. Tigger is even staying on the couch when Arthas jumps up because he knows it is all okay. The kittens are grown (they are just about a year old now) and so sweet. Alinea is definitely a little smaller than Ella and she is the adventurous one. Ella likes to hide, but she also plays and likes her lap time. They have grown into beautiful cats.

Arthas still has a few issues, but in the almost two years we have had him, he has relaxed, become more energetic and he now wants to protect his home. He likes the cats (he’s tried playing with Alinea a few times) and us. I even think we may be able to introduce him to Falco at some point, something a year ago I didn’t think would be possible.

When I planned my menu the other week I really wanted to make spring rolls. I love the little packets of goodness and they make great lunches for later in the week. However, a cold kind of derailed my intentions, but I still wanted spring rolls. So … deconstructed spring rolls it was. Easy to make, still kind of pretty on the plate and they work for lunch also. No reheating required. 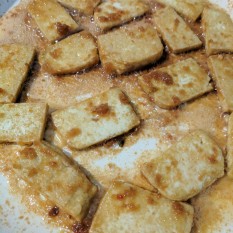 In this case – cut up a bunch of veggies (pepper, carrot, cucumber, scallions) and fry up some tofu with a spicy peanut sauce, make some rice and plate. It really was that simple and took maybe twenty minutes. Cutting up the vegetables was the longest part of this. The peanut dipping sauce does doubt duty as the glaze for the tofu and the sauce on top of the “rolls”. It works.

There is no specific recipe for the dipping sauce. I pretty much take:

and adjust the amounts as needed. I don’t measure, but I do taste along the way and it tends to work out. For a dressing, I add a little water, but if you add more than two tablespoons you will need to add more peanut butter as the flavor dilutes too much. 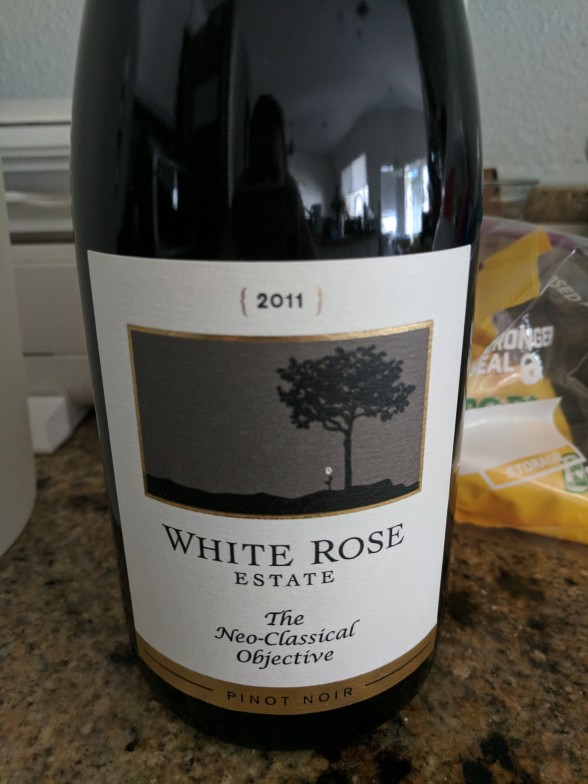 Is there anything better on a rainy Sunday morning than fresh cinnamon rolls? There might be, but they are pretty darn good. I decided to use up the last of the buttermilk I had on hand (from waffles the week before) and make cinnamon rolls. This was the first time I used buttermilk in the dough and wasn’t certain how it would come out, but the final result … oh my good. 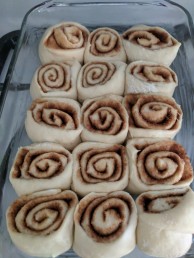 In a small bowl, place the water and top with yeast. Let sit at least ten minutes (up to 45 minutes) to proof. Transfer to large bowl and add buttermilk and oil. Mix. Add one cup of flour and mix. Add salt and baking soda then mix again. Add flour, 1/2 cup at a time until a soft, but not sticky dough, forms.

Flour a clean surface and dump dough onto the flour. (I like to leave a little to coat the top of the dough and my hands too.) Knead dough, adding a little flour at a time if needed to prevent sticking, for about two minutes. Return to bowl, cover and let rise for about ten to twenty minutes – dough should rise, but not double.

Divide dough in half. Using a floured silpat as a base, roll the dough to cover the silpat. Brush the dough with melted butter. Add 1/2 of sugar mixture and spread to evenly coat dough. Roll the dough starting from the long side, pulling tight through each roll. Cut into rolls, about 1.5-2 inches thick. Place in a buttered pan (I ended up using an 8×11 and an 8×8 pan, but I think a 9×13 would work). Repeat with second half of the dough. Allow to rise for 30 minutes in a draft free place (I use the oven, just not turned on).

Heat the oven to 400 degrees. Brush the tops of the risen rolls with melted butter and bake for about 20 minutes. Remove from oven and glaze while still hot with a mixture of milk and confectioners sugar or glaze of your choice. 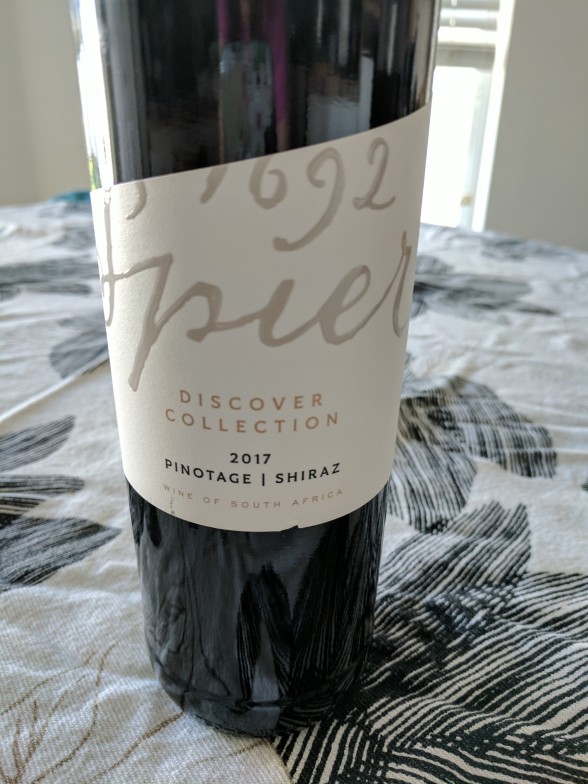 Lately I’ve been on a baking kick. I’ve made coconut cupcakes that totally didn’t turn out, lime buttercream that totally did turn out (which caused me to make vanilla cupcakes for the lime buttercream), malted cupcakes with mocha malt buttercream (cakes were great, buttercream only ok) and a coconut-lime pie where the curd and the crust were fantastic, the cream tasted good, but had a weird texture. My experiments have been a little . . . interesting lately.

coconut cupcakes (did not work)

This weekend the experiment was banana pie. I’m of mixed minds when it comes to banana pie – I love banana and I love pie, but sometimes banana in pie isn’t great. So I decided to start with mom’s banana pudding recipe, make my own caramel and top it with a lightly sweetened whipped cream.

The one thing I can say about this pie is that the caramel and banana work really well together. Match made well. Bob liked it – calling it one of my best pies – so there is a definite reason to keep this recipe. The only thing I would do differently is use a vanilla wafer or traditional pastry crust instead of the cinnamon graham cracker crust. But it is still really good.

In a medium saucepan, heat sugar over medium heat until it melts and turns an amber color. Stir as little as possible to prevent crystal formation. Reduce heat to low (or remove from heat) and add butter, stirring to incorporate. If on heat, remove from heat and add vanilla and heavy cream. Mix well and allow to cool. (I ran it through a strainer just to get it super smooth, but that is unnecessary, really.)

Combine all ingredients in a medium sauce pan and cook, stirring frequently, over medium heat until it thickens. (I did add the vanilla at the end of the cooking, just because I forgot to add it, and it still worked.) Whisk frequently so lumps do not form, and allow to cool before filling the pie crust.

To assemble the pie, take the crust (graham cracker, vanilla wafer or traditional pastry) and coat the bottom with about half the caramel mixture. Spread to an even coating.

Chop one banana and layer the slices over the caramel to cover the bottom of the pie dish.

Pour pudding over banana even out to a relatively uniform layer. Add whipped cream (~3/4 cup heavy cream and 1 tablespoon confectioners sugar) over pudding layer. Cover and chill for about two hours.