We took advantage of John being here to go back to a fabulous restaurant in Sarasota. Darwin’s on 4th is a Peruvian inspired restaurant that does some microbrew beers and really fabulous food. The guys (John, Bob and Dad) had a Beer sampler each – five, five ounce beers from a choice of twelve. So Bob and Dad had their favorites and John had his.

Yes, that was fifteen beers on the table.

But as good as the beer was, for those who like beer, the food really is the star at Darwin’s. We started out with the beef skewers and pork taco with avocado aioli. (Sorry Erin, this was not a vegetarian friendly meal.) I kinda of forgot to take pictures of these, and really they didn’t last long enough to get a picture, but I made up for it with

The Skirt Steak with plantains 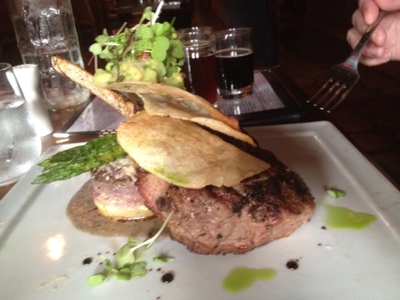 Bob had the special – Veal chop with potatoes

We could have, and probably should have, but we did have to go for dessert. 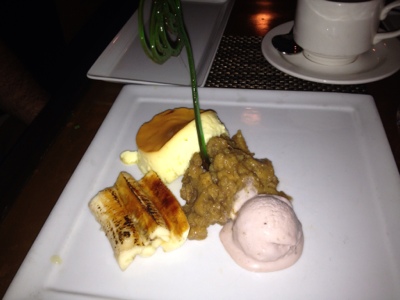 John had the Banana Flann.

Mom and Dad, and Bob and I both split

So worth every calorie.

One thought on “Darwin’s”