Happy Holiday Season. We ended Thanksgiving day here with Gracie bringing us the first gift of the season. 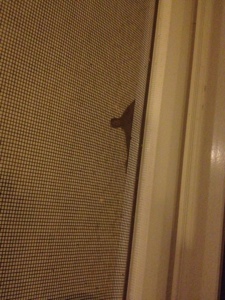 That is a very bad picture of a very terrified mouse. Gracie brought home, and into the house, a very alive, very not hurt mouse. This would be bad enough, but once she let go of the mouse, the poor thing ran behind the television. 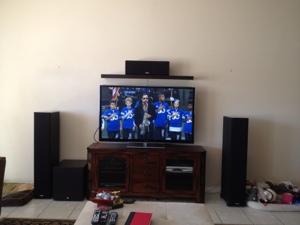 Shouldn’t be a problem, right? Get the mouse cornered, catch the mouse, take mouse outside and release. No big deal. Except here we had Gracie and Leia trying to catch the mouse before we did, Jessie trying to figure out what al the fuss was about and a mouse that disappeared. Yep. Gone. Can not find. In the house. With two adults, two cats and a dog watching it.

Bob found the mouse … It hid in one of his speakers. So how does one get a mouse out of a speaker? Take the whole thing apart. Bob took the speaker outside, I got the cats inside, and he took the speaker apart only to find the mouse hid itself in the insulation. After poking it with a small bamboo pole it came out and scampered under the grill then up the wall. Cats were safely in the house so they could not recapture it. The speaker however … 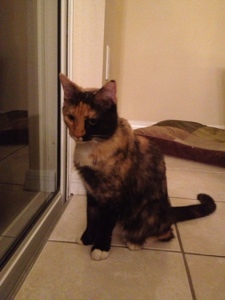 Be on the look out for an eight pound, very cute, tri colored possible serial killer. She responds to cheese, chicken and bacon and is not afraid of dogs.