A few months ago Bob asked if I would go to a concert with him. Jonathan Coulton does geek/nerd Indy Rock type music. Songs like Code Monkey and Artificial Heart. You know, geeky songs. Upbeat and fun, but listen to the lyrics and it is … Interesting. So, knowing how much Bob likes this guy, and it was in St. Pete, so not far … sure, I’ll happily go. But what he didn’t know (or forgot to tell me) was that there are no seats to this show. Standing only in a small front of the stage area. 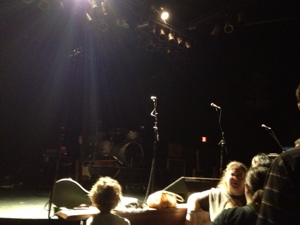 Mosh pit comes to mind, but I was told I can’t really say that as there was a good two feet between people, but I’m not sure. I had to watch the rather large purse of the girl in front of us to ensure I didn’t get hit as she danced. But, I will say, we had a very clear view.

And I felt normal height, bordering on tall. Seriously, I looked at the women near us, and I was at least as tall as most and clearly taller than many. Are geeky girls just really short? Val, I see an experiment/study in this. Maybe a genetic cause that makes short girls geeky or the geeky ones shorter than average? Hmm. … Hmmm …

With the really, really long week, I didn’t do much cooking, but today I did a lemon meringue pie. We are heading to a friend’s for dinner, and dessert is my contribution.

If anyone remembers the old Tasty Cakes, the ones before they began shipping all over the country, this pie is very reminiscent of the original TastyCake Lemon Pies. Flaky crust (1 stick unsalted butter, 1.5 cups flour, 1/4 to 1/3 cup water – process, roll into a ball, refrigerate for 20 minutes, roll out, bake at 350 for 10 minutes …. you have crust) with a creamy, lemony filling and fluffy meringue. This is based on an Alton Brown recipe, but I, of course, changed it. Zest of two lemons, juice of three, sugar, corn starch, water, salt, butter, egg yolks and done. Hopefully it tastes as good as it looks. I had to add the juice of a lime today as I only had two lemons. Oh well, we’ll see how it tastes later.

Somehow I still have not received my Wimbledon Ballot. Mom and Dad got theirs, Erin got hers, but I’m still waiting for mine. I have high hopes for getting tickets this year; it would be nice to check another thing off the “to do” list.