Cooking with fresh ingredients is one thing, and I was lucky this week that A. I had the time to cook, B. had good ingredients from my veggie basket to work with and C. came up with something good for dinner two nights in a row. But the trick is the leftovers. Just eat them as is for a repeat of a pretty darn good dinner, or come up with something else. Yesterday and today I went with the something else option. 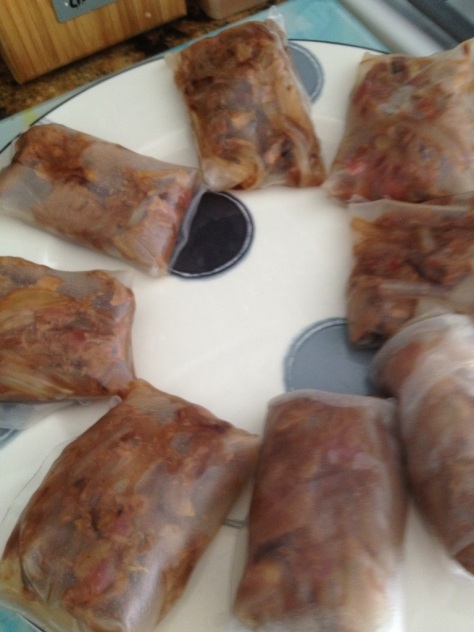 I’m still in the midst of painting (eight days down, about two more to go) so the leftover route was a good option. That and I’m a little sore in multiple areas of my body from said eight days of painting. So leftover dinner one – short rib rolls. I took some onion

caramelized them down, chopped up the leftover short ribs

and added some of the plum sauce. I let that simmer for a bit then rolled the mixture, a little at a time, in rice paper – easier than anticipated actually – and came up with dinner. I added a little heated sauce for Bob and short rib rolls it was. Somehow the addition of the onion gave this a great new dimension.

Tonight’s adventure was the pork. I thought about pork tacos, BBQ pork sliders, and a pork salad but none of that sounded appealing. So after seeing what my veggie basket had today I decided on a pork pie.

The savory pie idea came for, the awesome Chicken, Ham and Leek pie Emmie’s friend in England sent over one night the last time we were there. I had never really considered savory pies before, but now I’m slightly obsessed with them. BTW Brad – any chance of getting another pie when we come over next time? Just asking. I still have fond memories of that pie. … Back to the pork pie. I found a recipe for a Quebec pork pie. It had a fancy name and great reviews so I started there. But … never one to follow a recipe, I used the basic cooking technique and not much else.

I chopped two ribs of celery, one carrot, one half of a large onion, two cloves of garlic and the leftover pork from Monday. I tossed all of that into a large skillet (coated with a little butter) one cup of veggie broth, Italian seasoning, pepper and a dash of cinnamon. Stir all together, cover and simmer for about a half hour. In the mean time I made a crust. It’s not pretty, but it worked. I poured the filling into the pie plate, covered with what might pass as a top and popped it in the oven at 400 for about 30 more minutes. Uncovered. It came out looking like this. 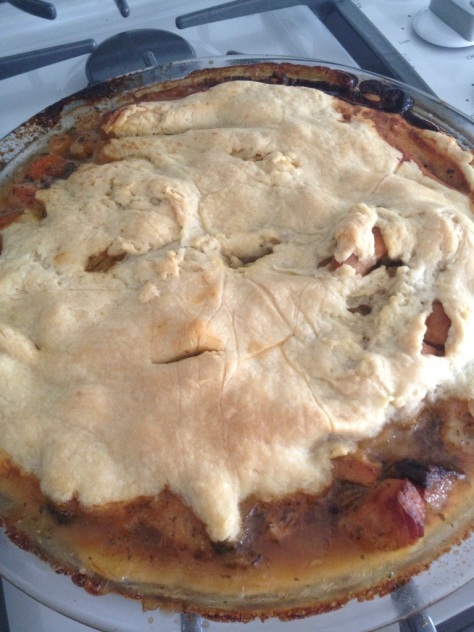 By the time we finished our first and second helpings, it looked like this. 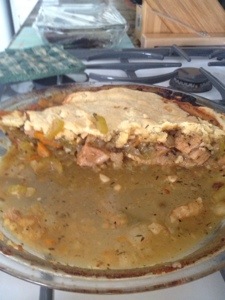 Needless to say, we both really, really liked it.

The front room (now to be referred to as the library) is looking really, really good. Love the dark brown walls and the new placement of the desk. My huge 302 pound desk. But it works. Still need to paint the bookshelf and get it all back together, but it is looking really, really good. Just our bedroom left and I should be able to do that next week.

If the cats decide they can supervise that is – such hard work being that cute.