It’s been a long few weeks. After recovering from the second England trip, catching up at work, readjusting to U.S. time and three Back-to-School Nights in one week, I haven’t cooked as much as I would like. But I am making up for it this weekend with a few new dishes.

But first, Bob and I tried a new restaurant Friday. Canta Rana is a Peruvian/Purto Rican restaurant that is relatively new to Sarasota. We decided to try it and are really glad we did. There is a very limited alcohol menu, but with food this good, we were just fine with wine and beer. The star dish of the night was the appetizer – a plantain with spiced ground beef and mozerella. Oh. My. God. Good. 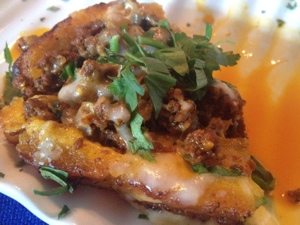 Talk about flavor. Tons. The sweetness of the plantain and the spice of the beef, it was a little bit of heaven.

You know I haven’t cooked much when Bob’s request for the week’s menu is “something lighter, maybe a salad or two.” (Have I mentioned it’s been a long few weeks?) So to start out this weekend I made a version of an Asian salad that I found. Of course, I changed the recipe quite a bit based on my no fish requirement and what I had on hand. So, I used mirin in place of the rice vinegar, soy sauce in place of fish sauce, juice of one lime and sesame oil in place of vegetable oil. In the salad, I reduced the cilantro by more than half and used the green onions I have in the garden in place of the scallions. I also toasted some pine nuts instead of using peanuts. So yes, there was a recipe, but I totally changed it. The results …. Fantastic. Bob was happy as anything with the heat in this salad. Not hot from cooking, but heat from the chili garlic paste. He was totally happy eating food that his food eats with this salad. There were no leftovers for me to take to work this week it was so good. 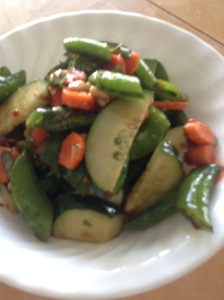 Now I can’t go totally healthy and with Dad’s birthday this weekend I used the excuse to bake. I loved the peanut shortbread from last week, but decided to go with butterscotch bars and lemon bars

I wasn’t sure about the butterscotch. It’s a flavor I can go with, but I never really want it and I never miss it if I don’t have it. I thought about substituting caramel, but I think Dad likes butterscotch, so I’ll try it. The cookie base is really simple to make and melting butterscotch chips is just not that hard. I did have to roast my own cashews as I only had raw on hand, but they worked. 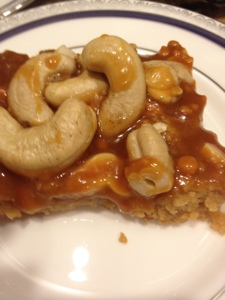 They are a little messy into chilled, but Bob loved the flavor and thought they beat the peanut shortbread.

And then I tried lemon bars. I love lemon meringue pie, lemon cookies, lemon custard, etc. so lemon bars seemed like a great thing to try. The crust was different, but it still came out really well. I do think I like cold butter crusts rather than melted butter ones, but that really is splitting hairs. I also used way more lemon zest than the recipe calls for – zest of four lemons to be exact – but the results were perfect. Lots of lemon flavor, but not too tart (because there is enough sugar in the while thing to really cut it which is why I added extra zest).

These are not lasting long.

I have a pork in the slow cooker for several meals this week and ricotta draining for a gnocchi recipe I want to try. Hopefully I can get out of work early enough to actually cook this week.