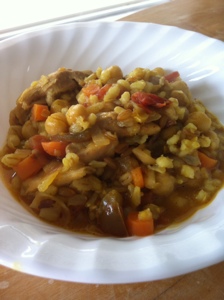 It’s not often Bob asks me to write down a recipe for something I’ve made. He has suggested it on occasion, but he almost never specifically asks. This is due in large part because he knows I don’t measure anything and I often change a recipe midstream when I realize I’m out of an ingredient or decide something else sounds good. But the stew today was really, really good. Lots of flavor, but not hot-spicy. So, as best as I can remember it …. The Middle Eastern Chicken Stew.

Heat oil in stew pot/Dutch oven and add the chicken with some salt and pepper. Brown the chicken then remove from heat. Add the chopped celery, carrots and onion to the pot and sweat the veggies until they are a little soft, about 5-7 minutes. Add the garlic and cook another two minutes. Add tomatoes and spices; mix well. 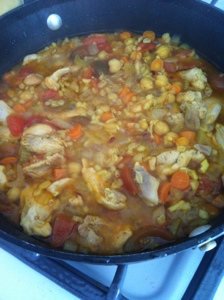 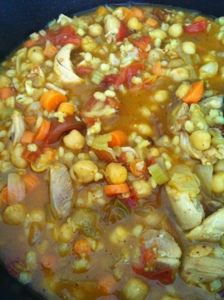 Adjust seasoning to taste and serve.

Now, the rice … I know is a little unusual, but I use a rice mix a lot. Well, I did use it all the time in Jersey, but I’ve had a hard time finding it in Florida. However, I did find it in the grocery last week, so I had it on hand. 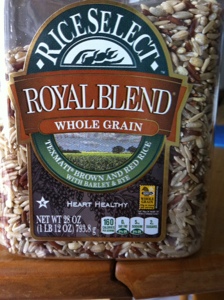 It’s three different rices with rye and barley. It isn’t too much of any one type so the favors are great. I really like this as an alternative to plain brown rice.

The end result of the meal – 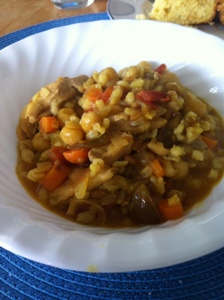 And it went surprisingly well with cornbread. I fully admit to being a Jersey girl, so cornbread is not something I make often, but it passed Bob’s southern taste buds – he even went for a second piece.

With Thanksgiving coming up this week, I’ll be working on desserts and snacks this week. Bacon bread, peanut shortbread, pumpkin seed brittle and pies. /happy dance