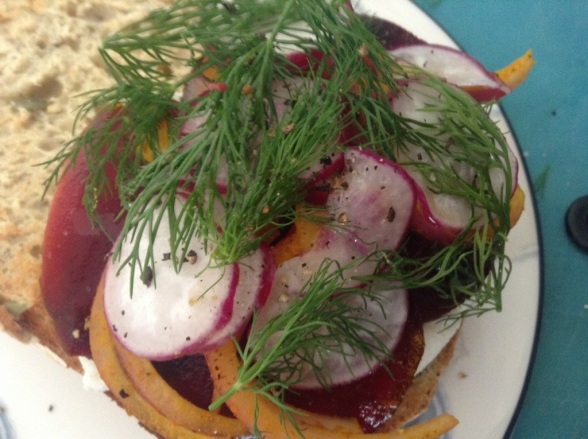 Here’s an idea … Take a bunch of foods you don’t particularly like, use a prep method you are not fond of and create a fabulous sandwich. A few months ago our Hello Fresh box had such a sandwich. Yes, I could have gone for the regular box, but the other options in the veggie box just looked so good I decided to go for it. Bob loved the idea of this sandwich, but I was pretty hesitant. I want to like beets and I try to like beets, but I have a hard time with them. I really don’t like radishes, red onions are not my favorite and ricotta cheese is ok, but only ok. There are way better cheeses out there. And pickling? No thanks.

So how did I end up loving this sandwich enough I find all the ingredients and recreate it? Dunno, but I did. Somehow the beets are not prominent in the flavor of this sandwich, the radishes aren’t sharp or bitter and the ricotta acts more as a condiment than a cheese. It’s pretty much a perfect sandwich, although very messy.

Toast the bread – I found using the broiler in the oven on low for a few minutes worked great. The 450 degree oven in the recipe was quick to burn the bottom of the bread.
Slice the onion as thin as you can. Mix with the turmeric, a little salt and pepper and 1 tablespoon vinegar (not quite a whole tablespoon is needed for the smaller amount). Set aside.

Slice the radishes thin. Mix with a pinch of sugar and a little salt (about 1/8 teaspoon or less) and set aside.

Slice the beet thin and mix with remaining vinegar. Pull the dill from the stems and do the same with the parsley.

Spread about two heaping tablespoons of ricotta on one side of the bread. Season with salt and pepper. 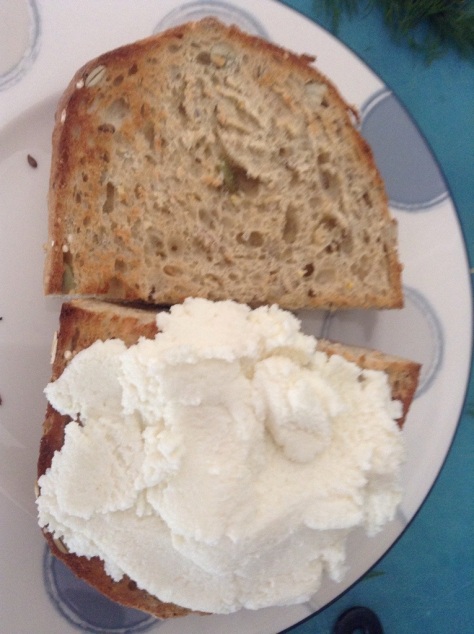 Add the beets in a single or double layer then top with the red onion. 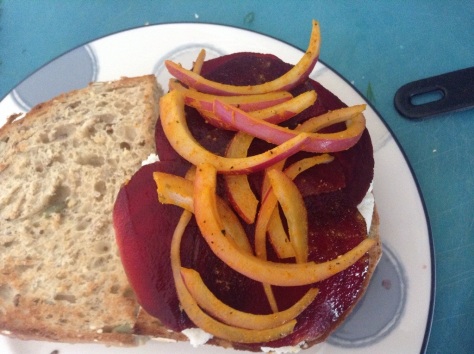 Add a layer of radish and then the dill and parsley. Be generous with the herbs – they really do add to the sandwich.

Drizzle a little olive oil over the top and too with the other half of the bread.

According to the original recipe this has 535 calories per sandwich. Since I always end up using way less of everything, I’m pretty sure it is less then that, but even if it isn’t, it is an awesome sandwich.

I’m trying to figure out how to get this to keep so I can take it to work for lunch. I’m thinking about keeping the ingredients separate and just assembling before I eat it, but am not sure if that would work or how the longer “pickling” time would effect it. Have to say though, it was very pleasantly surprised at how much I liked this. It isn’t something I would have ever tried from a cookbook or off a menu, but I love it. I’m also wondering how a fresh goat cheese or golden beets would work. They might make a nice variation. One thing is for sure, I may have to try foods I’m not crazy about more. Except mushrooms. Still can’t get past the concept of eating fungus. I might try, but that one is harder than some of my other food hang ups.

Hope everyone has a great week!