I think I have a problem; I may be addicted to my NY Times cooking app. Seriously, there is a cake in the oven right now and the recipe is from the app.

This makes the third recipe this week from the app.  Or is it the fourth? Hmm. Can’t remember. But since these recipes keep coming out well, I will keep adding things to my “saved” file and make them as I have time.

Last night’s dinner was another “food my food eats” meal. Bob doesn’t actually complain about these (and after actually going to the meat section so I could make chili this weekend, I am sooooo glad – it’s gotten expensive to be an omnivore) but he does comment around the eighth meal in a row with no meat.

So this recipe calls for sumac, a Mideastern spice that my grocery store doesn’t carry. I thought about going to one of the spice shops in town, but then I remembered that I have Zahtar. Zahtar is a blend of sumac, sesame seeds, thyme and sea salt. I was pretty sure this would work with the chickpeas and quinoa and it did. The salad is fairly simple – chickpeas, quinoa, celery, tomato, onion and herbs. The herbs in this case were chives, mint and dill. I always forget how much I like dill until I use it in a recipe. We use to grow a ton growing up, so it is a flavor I associate with cucumber salads and summer. But anyway … 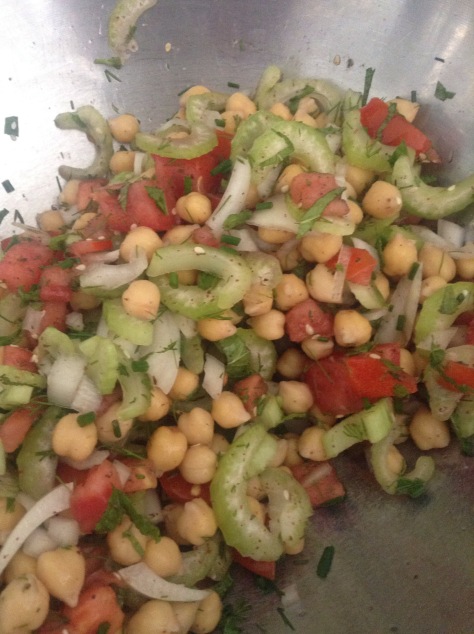 I got everything chopped and mixed together as the quinoa cooked. (The chickpeas I cooked a few days ago and froze in portions so I just took them out the night before to defrost.)  As the quinoa cooked I made the dressing. I going to highlight the sherry vinegar here as I think it sometimes gets a bad wrap or forgotten. It’s a good vinegar – light but still with a lot of character and flavor – and it really does add something to dishes. In this dish a balsamic vinegar would be too heavy and a red wine vinegar would be too tart; apple cider vinegar may work, but I think the sherry really does hit the right note.

I got everything mixed together and let it sit in the fridge for a few hours until dinner. I was particularly happy with this for a few reasons. It is light and refreshing. The mint, not a flavor I use frequently, added a freshness. The quinoa added a nuttiness while the chickpeas provided a lot of substance. Yes, this is a salad, but it’s filling and I wasn’t hungry a few hours later. The celery and onion gave a nice texture and crunch to this. So this is something I will make again. I can see making a batch on the weekend and having lunch for a few days during the school year.