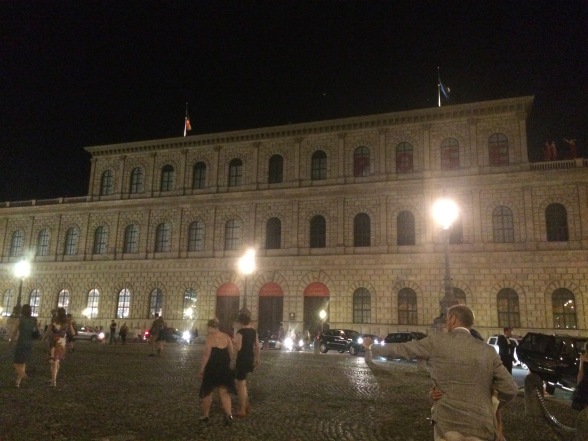 With Bob not feeling well we decided to make this day an easy, light day. We had planned to take in New a Town Hall, the Haufbrauhaus and the Residenz before heading to the Opera House for a ballet in the evening. We decided to skip the New Town Hall in the morning and just rest in the hotel. We did meet up with a friend from back home for lunch. 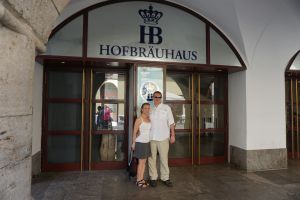 Leta has been to Munich before and it was happenstance that our trips overlapped. One of her favorite places to eat here is the Hofbrauhaus so we met there.

The Haufbrauhaus is an old building, and beautifully decorated inside. It isn’t overwhelming. They are known for their beer and being very busy so we thought ourselves lucky that it was not crowded that morning.

After having a nice meal and catching up, Leta headed back to get ready for her trip home and we headed to the Residenz. 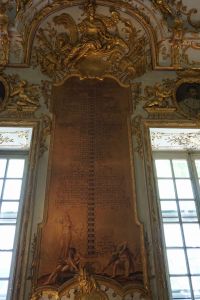 The Residenz was high on my list of things to do because it is a little unique. It was the home and seat of power for the rulers of Munich and Bavaria from the 1300s (maybe earlier) through the 1800s. Each ruler expanded the palace and decorated those rooms in the modern style for the time, so going through the palace is like seeing the history of art and decoration for a few hundred years. 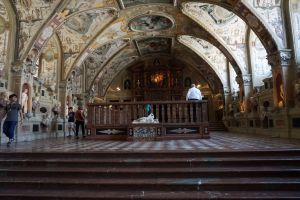 I liked the Residenz much more than Herenchimsse for one simple reason – despite being opulent and elaborate, it didn’t overwhelm and there was enough differentiation in the rooms to make it interesting. One of my favorites was the Room of Mirrors and the adjoining writing room. 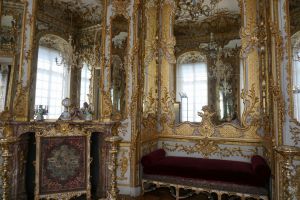 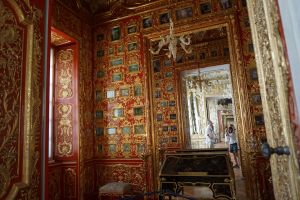 At first glance, these are very similar to other rooms you see throughout Europe. But on looking a little further you notice a few things that make it feel different: the porcelain additions to the walls, the subtle details in the plaster and the way the room is reflected in each mirror so it always feels like you are looking through the room make it unique. it is also a small room, so the opulence isn’t overwhelming. It does make it difficult to get a good picture, however.

We decided to skip any more touring (including the Treasury where the jewels of the rulers were located) in the afternoon and just rested at the hotel before the ballet.

When we decided on Munich, I saw that the Munich Opera Festival was this month and asked Bob if he would like to go see something while we were there. He said yes and we settled on the ballet of A Midsummer Night’s Dream. Yes, a ballet of a Shakespearean play in Munich. 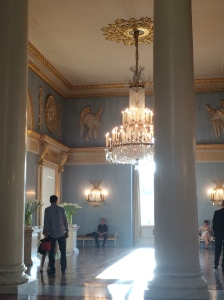 The Opera House is beautiful. It is exactly the right mix of grandeur and simplicity. The ballet itself was beautiful and yet very German. The fairy or dream scenes were … different. The discordant music with the minimalistic costumes were unexpected. I enjoyed the performance but am not sure I loved it. Bob’s comment was while he appreciated the athleticism of the dancers, his debt from making me sit through The Watchmen was now paid in full. Fair enough.

We didn’t do as much this day as we had planned, but that was ok. I think both of us needed a little bit of a rest after wandering around Munich in record heat for a few days. While we have no issue with 90 degree temperature, 90 degree temperature when you are outside and walking, or in buildings that are not air-conditioned, is a little hard on the body. But is was another really nice day.