On our first trip to Europe a few years ago, Bob and I found that we could only take so much art and elaborately decorated rooms. We became overload and just couldn’t appreciate the beauty of these after so many. Our solution was to find a science and technology museum and it had become somewhat of a tradition for us.  The Deutsches Museum is considered one of the world’s oldest and largest science and technology museums. It is huge and could easily take an entire day or more to see. We didn’t spend an entire day there, but we appreciated the few hours we did wander the museum. 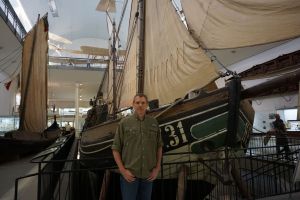 As with most technology oriented museums, there were a number of transportation exhibits. The boats were impressive and thinking about flying in some of the planes just scared me.

It was a nice way to spend our last day, especially since it was now cool and rainy instead of hot and sunny. We, of course, pick the weird weather week to be in Germany.

For our last dinner we had reservations at Tian.

This upscale, all vegetarian restaurant (yep, that is not oysters, but a cucumber salad with yogurt cream) was high on my list to try in large part because I thought it would be difficult to find non-meat dishes in Germany. (I was wrong and fully admit it.) This was an experience. The restaurant was beautifully decorated and I had a nice view of the kitchen as we ate. The pots of herbs that lined the plating area were used on the dishes that were sent out. This was also one of the few times I didn’t have to worry about the menu – I can eat everything on it. And eat everything I did.

This was also the best service we had in Munich. The other restaurants we went to had very good service, but start to finish, this place was special. The food was amazing and was as good as any Michelian starred restaurant I’ve been to. (It still feels VERY weird to think that I have eaten at one, let alone several of those. Really weird.) the food is beautiful and flavorful and spiced to perfection.  Between Cafe Katzentempel and Tian, this was a perfect way to end the trip.