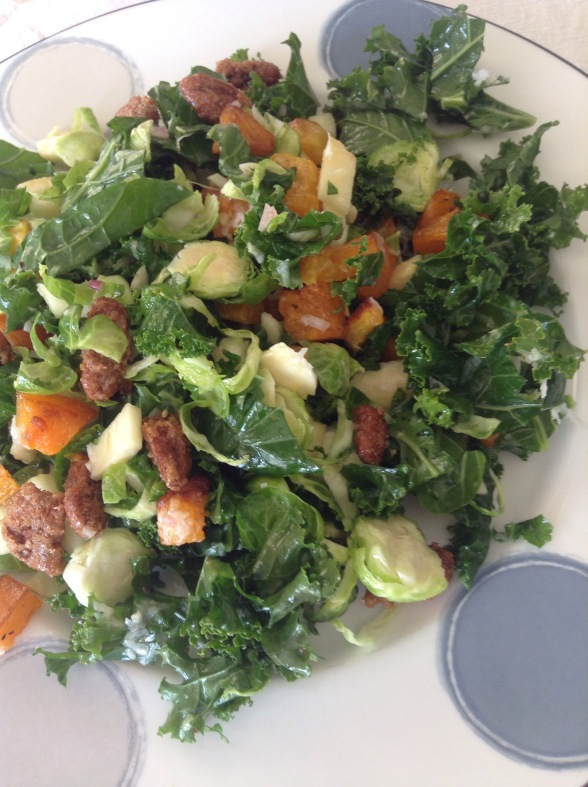 It’s rare that I have leftover ingredients in my fridge. I don’t keep a stocked pantry or buy groceries without knowing exactly what I am making with them. This leaves people confused at times but I’ve found that it works for me. I buy less, but more frequently and have far less food waste than I did when I bought what was on sale and then figured out what to make. (I also have everything to make a dish so no last minute grocery runs or major changes to what is for dinner.) It’s not necessarily convenient, but it’s been working for a few years now and I like it.

Last week I went to the farmer’s market and picked up veggies for the week. While I made my dishes with the food I bought, I actually had leftover ingredients that I needed to figure out what to do with. Specifically I had a half a bunch of kale (yes, I actually like kale), Brussels sprouts, and half a butternut squash. I thought about making pasta and throwing everything in, or a risotto, but none of that sounded appealing. I decided to scour the Internet and see if I could come up with something tempting, and I definitely did.

I have a few “go to” blogs and websites that I use for recipes or inspiration, but I came across a new one Two Peas and Their Pod. There I found a recipe for a salad that used all of my leftover ingredients. Kale, Brussels sprouts, butternut squash, cheese that I have in the fridge and a homemade dressing that is quick and easy. I’m not a huge fan of pomegranate so I left that out and substituted apple since I had one on hand. I also substituted sherry vinegar for the apple cider vinegar, but otherwise kept the ingredients the same.

One other change I made was in prepping the kale. Rather than massage the kale with extra salt, I poured a little bit of the dressing into the kale and mixed to coat the leaves. I let this sit for about 15 minutes while the butternut squash and pecans cooked. This let the vinegar work on softening the leaves and took out the extra salt. I added the remaining ingredients right before serving, added most of the dressing and tossed again. It worked perfectly.

I am definitely adding Two Peas and Their Pod to my recipe searches. This salad was incredibly good and while my pictures aren’t nearly as pretty, the taste and texture was fantastic. I also followed the candied pecan recipe for the nuts in the salad and they may be Bob’s new favorite snack.