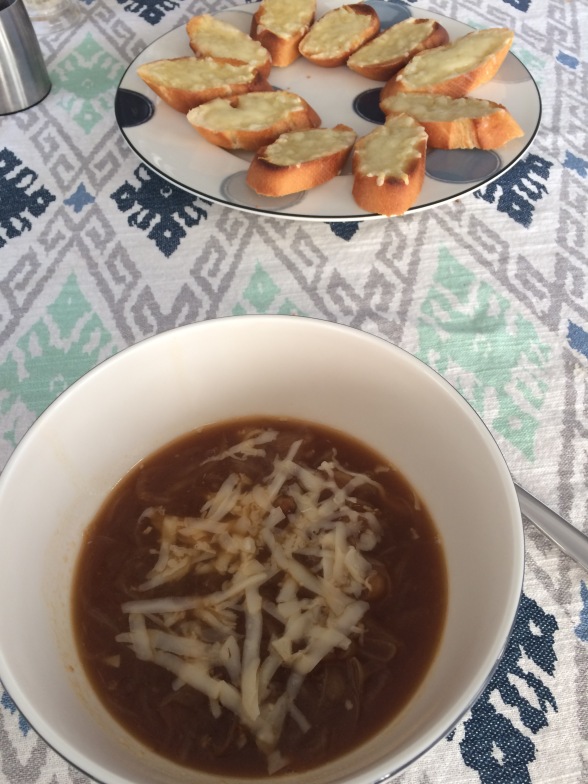 I love onion soup. It’s hearty and sweet and tangy and is pretty pure comfort food. The problem with most onion soup recipes is that they require beef or chicken broth and I generally don’t have those in the house, and I really prefer to not eat them if possible. So – to come up with an onion soup recipe that has the depth of flavor that regular French Onion Soup has, but without the meat based broth. 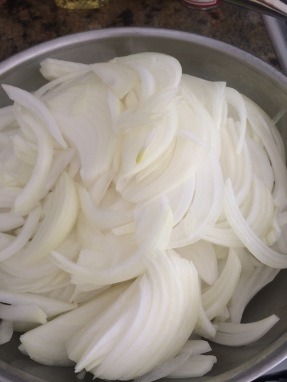 I started with looking for recipes and I found one that looked like a good place to start. This recipe became the basis for my recipe, but I did alter it for size and just ingredient availability. I started with onions – lots of sliced onion. I went with four, large sweet onions and tried to slice them thin, but not shaved. I slowly caramelized these, but I realized a little into the process (expect this to take an hour – you can’t rush caramelizing onions) that I needed to let them sit more so I didn’t get the deep brown color that I wanted, but I did get the flavor. Live and learn. I needed two pans to caramelize the onions – I had a lot of onion – but once they were cooked down, it looked like a lot less onion.

Once they were cooked down, I added the garlic and cooked for about a minute then added the flour and cooked for a few minutes more before adding a little beer, some thyme, ground mustard, salt and pepper and deglazed the pan. From here it was add the vegetable stock and let it reduce some, then simmer. In the end I added a dash of sherry vinegar and adjusted the seasoning.

Rather than add the step of ladling the soup into oven proof bowls and topping with bread and cheese, I made the bread separately. I sliced down a baguette I had and lightly brushed each piece with olive oil then topped with some shredded gruyere. I popped those in the oven and broiled them until they were melted. I did add some more cheese to the soup, but left the bread on the side for dipping. 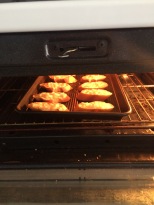 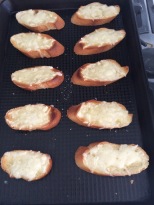 Slice the onions so they are thin, but not shaved. Heat butter in a large pan (or two) over medium high heat. Once melted, reduce heat to medium and add onions. Stir to coat in the butter and cook for a few minutes then reduce the heat to medium low and cook, stirring occasionally, until caramelized, about 45 minutes to an hour. (You may need to stir more frequently as it gets later in the process. The idea is to get the onions browned, not burnt and you want to scrape up as much of the browned bits from the pan as possible. If your onions give off too much moisture and it can’t evaporate, remove the excess liquid to help the onions caramelize.)

Once the onions are caramelized, add the garlic and cook, stirring, for about a minutes. Add the four, mustard, thyme, salt and pepper and cook over medium heat, stirring constantly for about two to three minutes. (You want the four to begin to brown, but not burn.) Deglaze the pan with the beer and scrape as much of the brown bits from the pan into the onions as possible. Add vegetable stock and stir to combine. Raise the heat to medium high and bring to a boil, then reduce the heat to medium and let the soup reduce a little, cooking about ten minutes. Cover and reduce the heat to low and allow to simmer for about fifteen minutes. When ready to eat, add sherry vinegar and add more salt and pepper as needed.

Meanwhile, slice the baguette on a diagonal and place bread on baking sheet. Brush with olive oil then top with shredded cheese. Place under a high broiler for about three to five minutes (or bake at 400 degrees for about ten minutes) just until the cheese is melted and beginning to brown.

Ladle soup into bowl, top with more cheese and serve with the bread. For full effect, dunk the bread into the soup, scooping up some onion to eat with it. Perfect winter soup.