We are fine. Let me start with that because that has been the question of the day. We are fine. We are incredibly lucky also, and everyone is ok.

Irma had the potential to do major damage to us, and since we did get hit with (or were very near) the western wall of the eye, the little damage our area sustained is just amazing. Whatever forces of nature merged to slow and weaken Irma worked in our favor and while there were some definite scary moments last night and into this morning, it all came out ok for us. For other parts of Florida, large parts of Florida, they were not so lucky and cleaning up and rebuilding after this (heck, just getting the power back on for many, may people) will take some time.

Bob and I walked around the neighborhood today and the one thing that struck me most of the sheer volume of water that came down over the last 48 hours. Nothing like Houston, but it still boggles the mind. Places where I would walk Jessie (and sometimes walk Arthas) are now rivers. No, seriously – we have retention ponds that are usually ponds – they are now connected and flowing into we aren’t sure where.

There is usually a large path where this starts, with lots of land between the path and the pond on the right. Everything to the left as the camera pans is normally field. The still pictures tell the story just as well, I think:

You are not supposed to have rapids and white caps in a retention pond.

But we are all ok. There is a lot of debris to clean up, and some things to check on. There will be roads flooded for a few days (hopefully less) and friends to check on. I will definitely take what we got, especially since it could have been, and should have been, so much worse. What I hope doesn’t happen is that people don’t take the next storm as seriously. Just because this one weakened and turned does not mean the next one will. The house has never suffered damage until it does; everyone has always been ok until they are not. There is always a first time for everything and if we get lucky again, fantastic. If we don’t, we will be prepared. 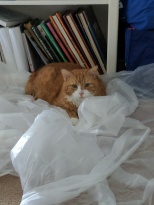