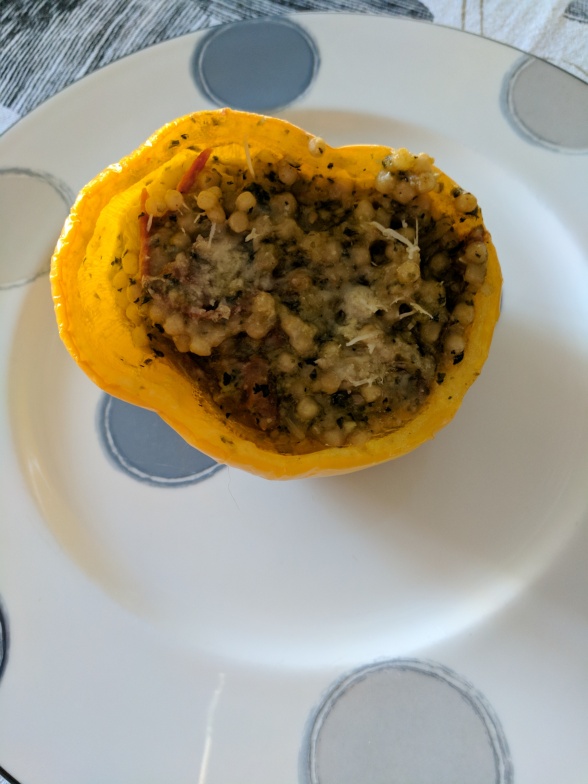 Every now and then I come up with something that just works. It isn’t often, but sometimes I do. This was one of them.

At the farmers’ market I found these incredible yellow peppers and some heirloom tomatoes. The garden has given me kale and basil, so I figured I could make up something with all of those. Bob isn’t a huge fan of peppers, but the yellow and orange ones he can do, so I thought he’d eat the filling and leave most of the pepper, but he ate the whole thing. The peppers were incredibly sweet and the filling had a deep flavor that was great on it’s own, but complimented the peppers so well.

Keep in mind that this was something I threw together and all quantities are estimations.

Peppers: Cut the top of the peppers off and remove the seeds and veins of the pepper. Coat in olive oil and lightly salt. Roast in 350 degree oven while you prep the filling.

Pesto: combine basil, kale, lemon juice, garlic, almonds and a pinch of salt in food processor. Blitz until everything is finely chopped. Add 1/4 cup cheese and about 1/4 cup olive oil and blitz again. Adjust seasonings to taste. Set aside.

Couscous: Heat a large pan with a tablespoon of olive oil over medium high heat. When oil is hot add onions and tomatoes. Cook for about five minutes, pressing the tomatoes with a wooden spoon every few minutes to help them burst. (you could also chop the into small pieces then add them about half way through cooking the onion.) Season with salt and pepper. Add couscous and cook for two minutes more. Add vegetable broth and bring to a boil. Reduce heat and cook, stirring occasionally, until all liquid is absorbed, about 15 minutes. Remove from heat and stir in pesto and most of the remaining cheese.

Put it all together: Remove pepper from oven and carefully (they are hot) fill each pepper with couscous mixture. Sprinkle a little cheese on top and return to the oven for about twenty minutes. There should be enough filling left for a third pepper, but I took it for lunch the next day instead of making another pepper.

One thought on “Couscous Stuffed Peppers”