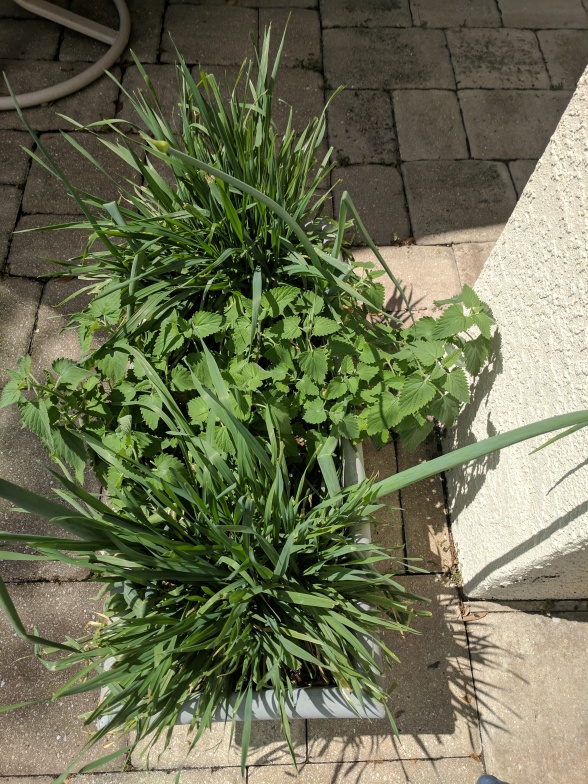 Look at that catnip! I don’t think I’ve ever had a catnip plant look so big and healthy. This is due in large part to Miss Leia sleeping in the catnip frequently, but the current crop of cats are fairly uninterested in it. Tigger occasionally sniffs it and may chew a leaf here and there, but for the most part, he leaves it alone. Alinea likes to chew the cat grass near the cat nip, but that is mostly because she is imitating Arthas.

These two are pretty funny, but Arthas is mostly fascinated with Ella. He follows her around and doesn’t seem to mind when she lays next to him on the couch.

The “garden” is doing well. My tomato plants are still going strong and the basil is even alive – pretty impressive for me since I generally kill basil inside of week or so. Right now the kale is the only thing that looks a little sad, and it isn’t really sad, just not growing as quickly as it did last year. I’m hoping when the weather warms up (I know we don’t have snow, but 40s at night and 60s during the days is cold for south Florida in the spring) it does better, but who knows.

This week I decided to do some more planting. I didn’t have any more vegetables I really wanted to grow, so I found more herbs! Little more basil (since it is somehow growing now), thyme, lemon balm, cilantro and sage. I don’t expect everything to grow and survive, but I’m hoping. The lemon balm smells fantastic – like lemonade – so I’m hoping that grows. No idea what I’ll do with it, but I’ll figure something out.

And just because … pet pictures!