So this month it was eleven years that I’ve had Tigger. Eleven years since I brought three little kitties home, made Jessie super happy and embraced the crazy cat lady vibe. It is hard to believe he is eleven years old, but he is still my baby.

I love that Tigger gets along with the kittens. He seems less enamored with Arthas, but they do get along – they just don’t bother each other for the most part and I’m good with that. 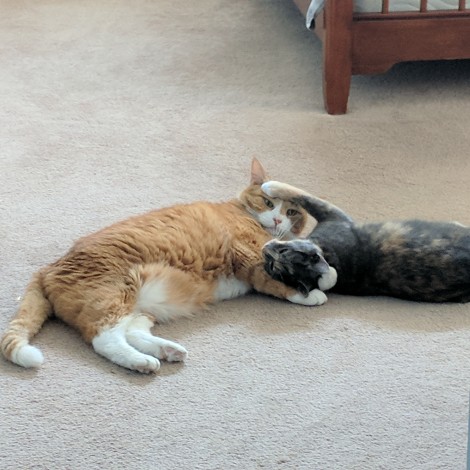 Yes, my poor boy frequently looks annoyed with the kittens, but I know he kind of likes them. He lets Alinea eat out of his plate and I do often catch them playing. He, like his mother, needs his alone time, but for the most part, he likes having them around. I think.

Arthas is also very normalized with the cats now. I came back from walking him the other day and Alinea, who was in super play mode, jumped on him (near his head) and he ignored her. No growls, no jumping, not standing over her, just looked and kept walking. I was so proud of him!

And the kittens. They are almost full grown now. I can’t believe how adorable Ella is and how beautiful Alinea is. Yes, I’m biased, but not totally out of reality. 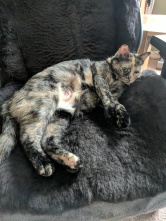 Hopefully it won’t be so long for me to get an update on these guys again. I still miss my other furry creatures, but it is really nice having the house full. And they are wonderful babies.