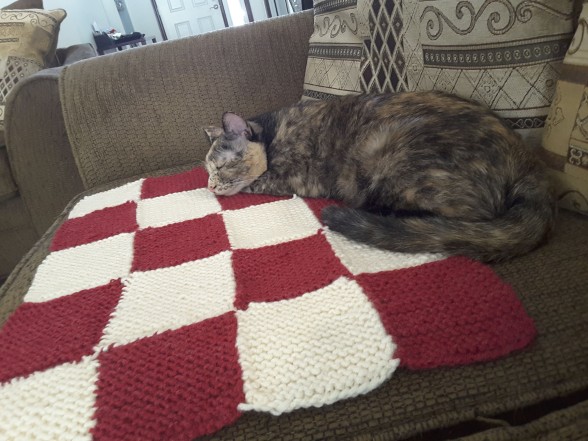 Holy cow, I actually kitted a cat blanket. Mid July I needed a hobby (see post) and decided to try knitting. I found, once I got the basic hang of it, that I really like knitting. I like the routine of it, the visual progress and the vague sense of accomplishment. I worked a lot on the squares (I had the time) and I ended up actually making a little blanket for the kitties to lay on. 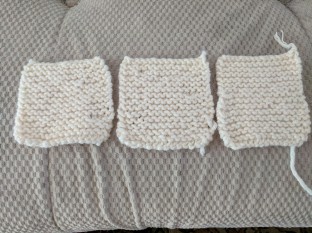 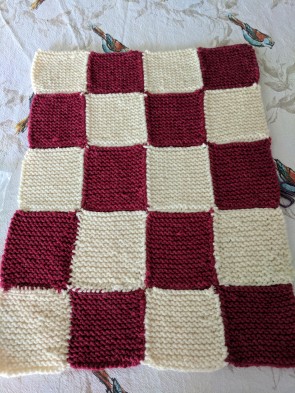 Little by little I managed to A. get a little better at knitting and B. get closer and closer to making a blanket. Once I had all the squares done, I re-visited You-tube and learned how to attach them. That took an entire day. About 5 hours to stitch together the squares and weave in the ends (there were a lot of squares). My shoulders HURT at the end, but I have a cat blanket! 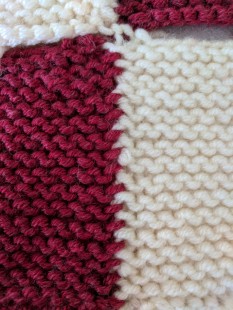 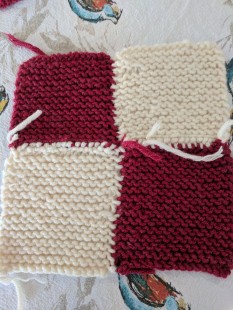 I realized part way through that I stitched together a few squares backwards – as in the seaming is visible on those squares on the opposite side of the blanket from the other squares. I thought about going back, taking out all of those stitches and starting over, but I decided to embrace the mistake.

That is something knitting is helping me with. There are a lot of errors as I learn and sometimes those errors are huge and need to be corrected immediately (usually by ripping the knitting up and starting over) but sometimes I can let them go. Those mistakes, in the overall project, don’t detract from the finished item and they are a good reminder that mistakes, generally, aren’t fatal. And really, at the end of the day, it is about the project, learning something new and the kitties. The kitties are important and they are not complaining about the mistakes in their blanket. 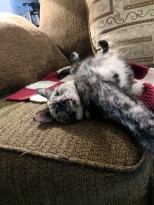 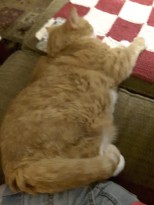