It has been a few weeks since I’ve posted not for any dire reason, but I just got busy and decided to prioritize work and things at home to updating the site. One of the nice things about doing this just for the fun of it is that I can take some time off from posting when needed and I feel no guilt.

So a general update: The furry creatures are doing well. (I think they all are … I’m a little worried about Tigger, but Bob keeps telling me he is fine so I’m hoping it is just the time of year that has me on edge.) The kittens are just about a year and a half, but they still play like they are babies. The couches are not going to survive this set of kitties, but it is nice to see them used as an obstacle course, a hideout and a lunching pad on a regular basis. Who knew couches were so versatile? Arthas is also doing well. He rarely cares if the kitties play near him, and every now and then tries to join in, which is amusing and slightly heart stopping given that he is five times their size. 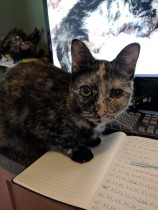 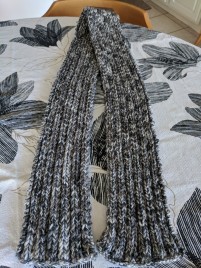 I’m still knitting, surprisingly. It is something that is fairly relaxing and gives me a sense of accomplishment. It is also way cheaper than wine and something I can do Sunday mornings unlike my wine hobby. For the most part I stick to one project at a time, but given that I’m going to start a blanket for the spare room soon, I may need some smaller projects to do here and there while working on that. I need to look around at some of the charities again and find out which ones I can send scarfs to and which ones accept blankets or squares to make blankets. I did make Bob a scarf – yes, the Florida boy who has no interest in cold weather has his own scarf. It turned out pretty darn nice if I do say so myself.

Wine. I do love wine and I’ve been enjoying just enjoying a glass here and there instead of constantly taking notes and trying to discern flavors. Don’t get me wrong, I still like doing that too, but it is nice to just have the glass. With the weather so weird lately (we have the doors open and I’m tempted to put on shorts today) we’ve had an eclectic mix of wines. Some of them I will have individual posts about, but I’m considering revamping how I write them. My palate is not able to pick up some of those subtle flavors and I honestly have no idea what others taste like even though they are in tons of descriptions (cassis I’m looking at you).

Cooking has not been very interesting lately, although I did make a rather nice Thanksgiving Day dinner, but that gets it’s own post. I love the new job, but with the hour plus commute each way, I am not getting very creative in the kitchen. Either I’m too tired to read and comprehend a recipe, too tired to get creative or just not up to thinking that hard after a long day, but cooking has become a little more routine around here. It’s not a bad thing, and we still eat fairly well, but it just isn’t original. Although I will say, I am pretty happy with the 3 bean enchiladas that I came up with from the 3 bean chili.