I came across a recipe for Asian style spicy pork lettuce wraps the other day and thought they sounded fabulous. But, I had chicken taken out of the freezer, Bob is trying to avoid the rice/grain stuff and I only had red leaf lettuce. What does one do in this case? Find a different recipe with chicken? Pull the pork out of the freezer? Head to the grocery for the proper ingredients? Nope, modify.

Basically, I marinated the chicken in cubed pieces in soy sauce, garlic, ginger and peanut oil (I had no sesame oil the recipe calls for). When I got home from work today, I mixed up some sriracha chili sauce, honey, the peanut oil and a dash of sesame seeds (for some reason, those I had – go figure). I pan fried the chicken, placed the hot chicken on the red leaf lettuce and drizzled some of the chili/honey dressing over it. The results were pretty good – spicy without burning and lots of flavor from both the marinade and the dressing. Bob declared the experiment a success.

Over the weekend, I gave in and fed my ice cream craving. For those who live in a region with a Publix grocery store, I highly recommend their Black Jack Cherry Ice Cream. It is so good, and worth every calorie and slight guilt for going off the ranch. This is a real cherry ice cream with chunks of dark cherry and chocolate chips. I go for the full fat, full sugar variety (’cause really, if you are going for the ice cream anyway, ya might as well go all the way). This stuff is so good I may have replaced Bryers Mint Chocolate Chip as the favorite. I’m not saying it has, just that it might. 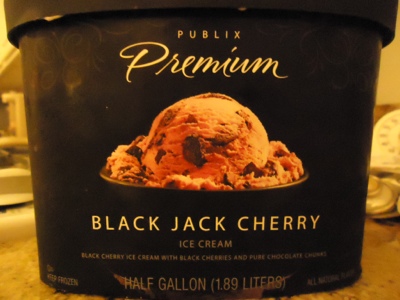 On a pet note, we got some lovely rain today; poor Gracie decided to go out at lunch and got stuck outside when Bob went back to work after lunch. Poor thing came home eight hours later soaked.  So wet she actually let me dry her with a towel.  I thought about taking a picture of her giving new meaning to “drowned cat” but she was so sad looking I didn’t have the heart.