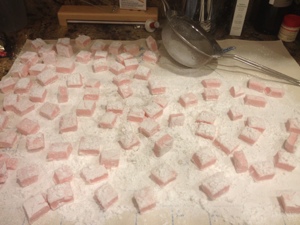 And all through the house, all the creatures were stirring, but thankfully not a mouse.
The ovens were on with goodies to bake
In hopes of a fabulous Christmas feast for a hunger to slake.

Ok, that is the best I have today. (with help from Bob after a very strong beer.) It’s not very good, but it is in the holiday spirit. And it leads nicely into my day of baking.

My Christmas prep adventure stared with my attempt to wrap Bob’s present. The box is larger than it looked and when a new roll of wrapping paper failed to cover it, after trying a few other rolls first, I improvised.

.
I’m claiming the double paper in an effort to be more festive, but really, I don’t think I had much of an option.

But the baking started yesterday with the peppermint marshmallows. I found the recipe last year and decided I had to try them. While not technically difficult they are a little time consuming.

Corn syrup, sugar, water and salt combine with crushed peppermint candy to make a sticky, sweet oh-my-it-burns-when-you-accidentally-touch-it goo. That isn’t a bad thing, but it is a warning. Making marshmallows also involves a lot of whipping and some creative use of confectioners sugar. Every surface the mixture will touch needs to be coated in confectioners sugar so it doesn’t stick – because trust me, if you leave even a little not coated, it will stick.

Bob helped with these today – he cut the marshmallows into little squares for me. That may not sound like a lot, but given my inability to cut a straight line and all the other baking I was doing, it was huge for me. The results when covered with a bittersweet chocolate are perfection. Even Bob who does not like marshmallows has indulged in several at a time.

My other baking adventures today included the pecan pie cheesecake with the yummy goodness topping and a caramel chocolate pie. Now the cheesecake is easy … No real issues there, but the chocolate pie sometimes makes me question my sanity. Do I make it because I love the pie, because it gives me an excuse to ask Bob to rub my shoulders, or because it is just one of those things that you make just because. Probably all three, but mostly because it is such a good pie. Not an easy pie, but it is darn good. 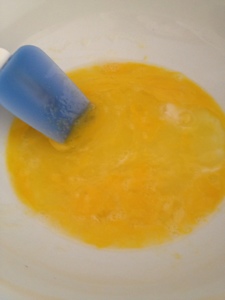 After about twenty minutes of whipping over a double boiler to about 160 degrees so it doesn’t kill anyone, it looks more like this

And after more whipping to cool it down, and the addition of the chocolate, butter and whipped cream it looks like this

Worth every second of shoulder pain for this one.

And just because she is super cute, a gratuitous picture of Miss Leia who helped with all the wrapping.