Three day weekend! Can I just say how excited I am about this? Nine days left with students and a three day weekend. (Yes, for those that don’t know, teachers and school personnel are as excited about the kids getting out for a summer as the kids are. Probably more. It is not that we don’t love them, but we don’t want them around for a while by this point in the year.)

On to cooking. I started the week with a salad. I felt the need for more greens and something healthier. Part weather, part yoga and part the large amounts of take out over the last two months had my body screaming for veggies. So … Mixed green salad with yellow tomatoes, orange peppers, cucumber and topped with a little steak that I marinated in sriracha sauce, honey, sesame seed and sesame oil. Pan fried and the left over, non used marinade on top as a dressing. Bob got meat, I got salad and we were both happy.

I also made what I am referring to as international fajitas. Soy and garlic marinaded chicken with a Caribbean pepper blend (very hot) in a Mexican tortilla, with Videla onions, orange pepper and finished with an Italian cheese blend. Had this with a Californian red wine. I actually really liked this. It worked well, and the flavors were balanced.

I also tried a new brownie recipe this week. 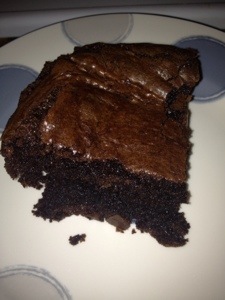 They look so good, but they didn’t really work. Not sweet enough, not chewy enough, and they didn’t have the great brownie taste/feel. Oh well.

We are grilling out Monday, and I have the menu planned. Heck, what else was I going o o sitting in a room for five hours watching one kid take a test? I planned an entire meal, wrote out the shopping list and mentally went through the cabinets to make sure I wasn’t missing anything.

2 thoughts on “I Actually Cooked This Week”