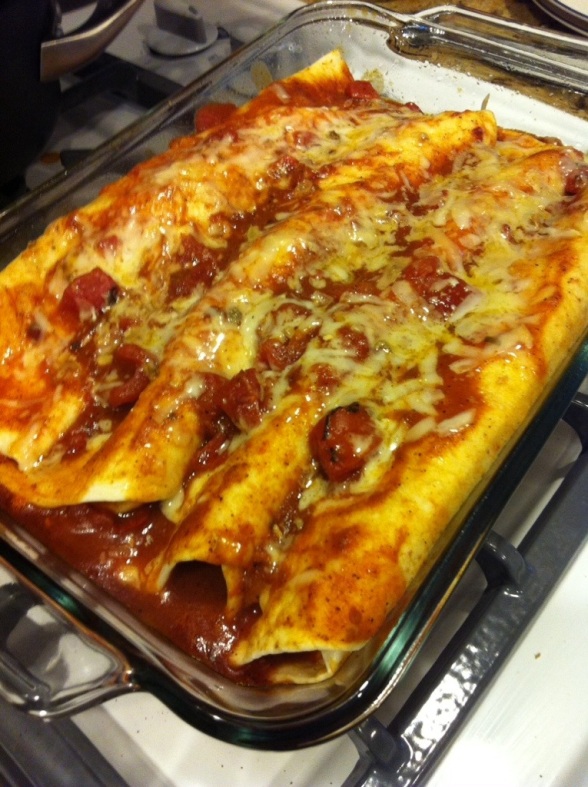 After the roasted peppers that Bob put up with, I wanted to make something that I knew he would like. I had pulled part of a pork butt out of the freezer the other day so I tossed it in the slow cooker before going to work one morning. I had a few ideas of what to do with this, but was still pretty uncertain until I got home. I decided on enchiladas. I’m not known for Mexican cooking and I don’t do a lot of it., but I wanted to try. So I scoured recipes for a red sauce and found all of them included ingredients I just didn’t have on hand. True to form, I improvised.

I melted the butter and let it get a little brown, then added the four to make a roux. Once that was mixed and browned (lightly) I added the chicken stock, tomato paste, cumin and oregano. I started adding the chili powder, but didn’t go as far as most recipes said. 1/4 cup? Really? Umm .. I just started pouring and when it looked like enough I stopped. I probably used half the amount most recipes called for, but it works. I stirred that all together and let it thicken a little. I then added the can of diced tomatoes because it needed something. I let that cook for about 15 minutes, stirring every now and then.

The enchiladas. Bob picked me up some tortillas so I used large flour tortillas for this. I coated both sides in some sauce, added more sauce to the bottom of the dish I was baking them in (after spraying it with cooking spray so everything didn’t stick). Add pork, fried (almost caramelized but not quite) onions and cheese. I used the last of the cheese from the Thanksgiving cheese tray so we had an English cheddar, a French sheep’s cheese and some Italian reggiano that I shredded and mixed together. I rolled up each tortilla and put them together in the baking dish. I added more sauce and cheese to the top, covered and baked them at 350 for 30-40 minutes. 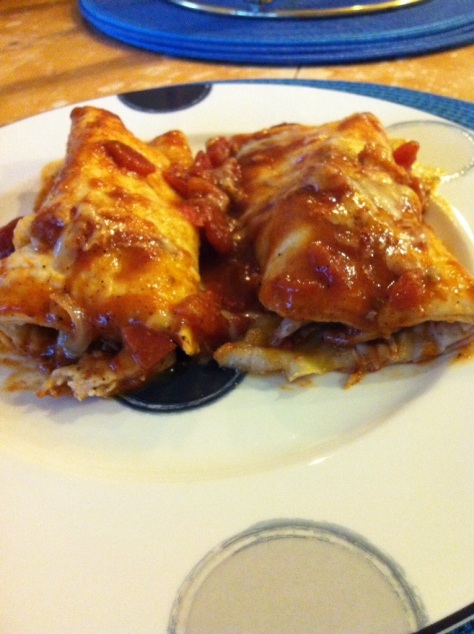 Bob loved these. He said the sauce was perfect and the whole thing was great. It help that we had good ingredients to work with, but I have to say I was pretty pleased with this little experiment. And since I actually remember what I did, bonus since I can make it again. I have leftover sauce and leftover pork so I can see another round of this soon. Just have to get cheese.