Once when visiting Brad and Emmie in England, we strolled to the local pub for dinner. (Yes, I’m sure we did this more than once, but for this story, it’s once.) On the menu was a nut loaf roast – vegetarian’s alternative to meatloaf. Not a huge meatloaf eater (have never actually had meatloaf) I was intrigued and the description sounded wonderful. Bob thought I was a little nuts, but I went ahead with trying it. It was fantastic. Warm and comforting and filling without the meat. For me, it was a perfect dinner. Fast forward two years and a real desire to eat a little lighter after the holidays, and I decided to try my hand at a nut loaf roast.

One would think finding a recipe would be easy, but it wasn’t. I found a few, but most have mushrooms in them and if I can avoid the things, I do. Yes, I’m positive the original I ate had the fungus in it, I just didn’t care. But I settled on one recipe I found on a British site and decided to go for it. I chopped the beet and cooked it just a little in a large pan and a touch of water. While that was cooking I peeled and diced a carrot, parsnip and onion. I removed the beet from the pan and added the other veggies and cooked them down just until they were soft.

From there, I mixed some chili garlic sauce (about a teaspoon) and a two small tomatoes. I added to all the vegetables the breadcrumbs (had panko on hand so that is what I used), sunflower seeds, sesame seeds and the oats. I did grate some cheese in here and added a little salt and pepper. For the nuts, I used a handful (my handful so about an once probably) each of walnuts, pecans and almonds that I ground up. I mixed everything together and put it in a loaf pan to cook. 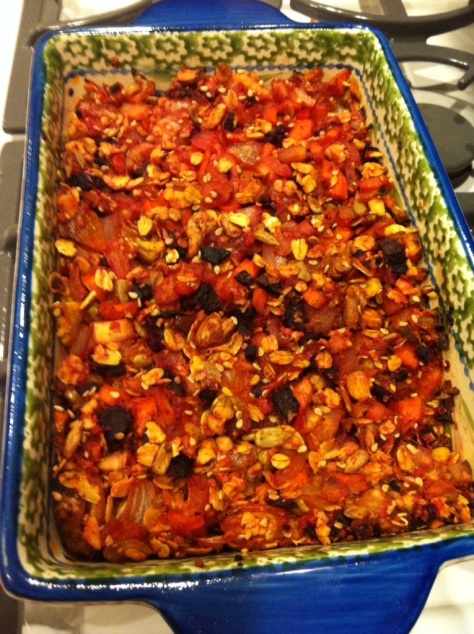 I was a little worried since my ability to convert metric to American units is a little iffy. I think I got most of the proportions right, but I was still nervous. After about 45 minutes in the oven came the moment of truth – how did it taste? Well. It wasn’t the nut roast I remembered, but it was darn good. Bob declared it a success, although not as good as the Moroccan Chicken Stew. My only issue is that, while delicious, it needed something to bind it together; serving was interesting. I think the next time I make it I may up the oats, skip the tomato and add an egg. Flavors were great but it fell apart really easily. But for a light, vegetarian meal, it worked.