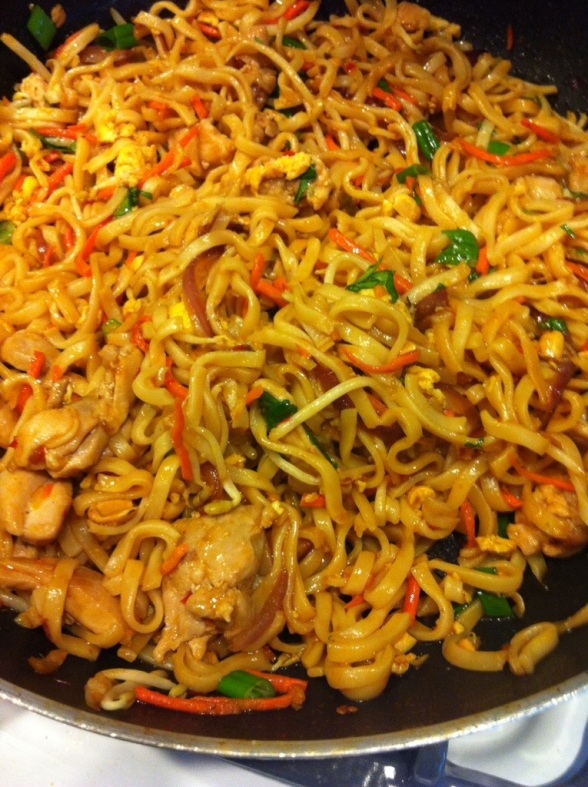 I am a huge Pad Thai fan. I love the flavors and the comfortable homey feeling of eating it, but I do not like getting sick when I eat it. Most Pad Thai is made with fish sauce as a main component to the sauce (which, let’s face it, makes the dish what it is) meaning I can’t eat it. Oh, I’ve been known to order it knowing full well I will be very, very sick for the rest of the night (on a very rare occasion) but those days are becoming fewer and fewer. So I did what any self respecting food addict would do – I scoured recipes until I figured out something that would work and hopefully taste great.

I began my search in my favorite vegan cookbooks. I figured if there was a fish free sauce out there, I would find it in a vegan cookbook. I did adjust the recipe a little, and it ended up working really well:

This made enough sauce for both Bob and I to have plenty for dinner and I have half the sauce in the freezer for use this weekend. As for the rest – I sliced three small chicken thighs and just cooked them through in some peanut oil. I took the chicken out and scrambled on egg in the same oil. Remove the egg and sauté a quarter red onion, one shredded carrot and one clove of garlic, crushed and diced. I added some lemon grass paste I have, then added the rice noodles, scallions and some cilantro. I also added back in the egg and chicken, pour the sauce over everything and toss off the heat. I added some crushed peanuts and came up with dinner. 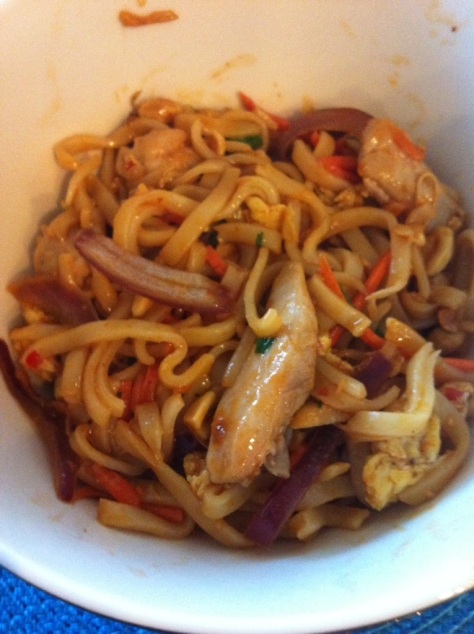 Bob’s only ‘note’ was that it wasn’t spicy enough for him. He liked the flavor, but he wanted more heat. I liked it as is, so we compromised; he puts hot sauce on his dish and I leave mine alone. Best part of this was that the whole thing (once I figured out what I was doing) took about 15 minutes to put together. Seriously. I chopped the veggies while the chicken was cooking and the rest was maybe five minutes to heat everything through. It was great!

And while most of the country is buried in snow, my Bougainville is recovering nicely in the new pot on the patio. I noticed this little gem while we were eating lunch out there today. 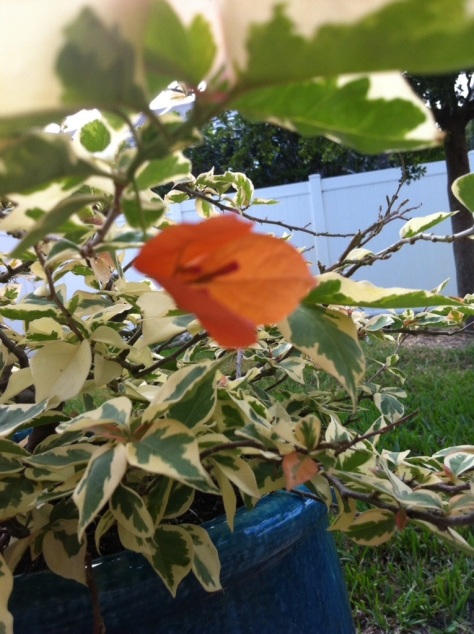 Yes, Mom. That is a flower. There were actually two of them on the plant which means I should be set for the equinox in spring.

Oh, and as I was walking Jessie today I came across this sure sign that I’m in Florida:

I want to know how I missed them all season and where I can get them!