I don’t do seafood. Haven’t in years. Something about throwing up for hours that made eating it less than appealing. But after the visit to the allergist last year where I found out it is fish only (and really only really really allergic to anchovies) I started trying shellfish again. A piece of shrimp in Key West, a taste of Bob’s lobster at Marina Jack’s and the shrimp and rice ball at Mozaic on New Year’s. So far so good and this week, I decided to try cooking shrimp.

This was not an impulse cook. Bob and I really like the Hello Fresh boxes we started getting after I had to stop the veggie baskets because of work hour conflicts. I get to experiment with food and ingredients, but I don’t have to figure the experiment out a few nights a week. One of the options for this week’s delivery was a Cashew Chili Shrimp over brown rice. I figured it looked ok and I liked the idea of shrimp better than mushrooms and Alfredo sauce. Bob really liked the idea of shrimp so we went for it. After a seven meeting day today, I came home and tried my hand at shrimp.

I fully admit I was apprehensive about this little experiment. Would my stomach handle the shrimp? Would I be able to cook it ok (shrimp is temperamental and super easy to over cook)? Would I even like shrimp after all these years? Who knew, but worst case I have leftover pizza or need to take off work tomorrow.

Well, I started the rice, chopped the garlic, ginger and chili pepper and made the marinade with the cute little soy sauce packets they sent (along with the aromatics) and some olive oil.

I cooked the shrimp for a few minutes then added the snow peas and then the basil and cashews. I tossed everything and came up with a pretty little plate. 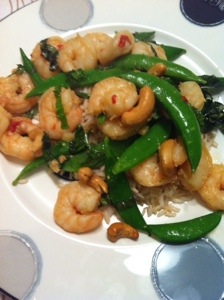 The results: I went a little heavy on the chili pepper, which means Bob loved it. He thought the shrimp were cooked well (yea me) and had a good flavor. I liked them, but I liked the snow peas more. He also thought the shrimp were a really good quality for something you would buy (instead of fish up yourself I suppose) and was impressed with the overall plate. There was plenty for us – almost enough for a third serving, but Bob had seconds. All in all, a good little meal and I have to give Bob credit for the a Hello Fresh find. And just because I’m throwing around names of things, the podcast Bob found this from is The Morning Stream so if you are looking for an amusing morning radio type program, there is my one recommendation for the year.