This week was full of experiments. A few of these I used a recipe for, but some, like the pesto, I just winged it. The flatbread was an amalgamation of several recipes, but I didn’t actually follow any of them. Except for the crust. I did use a a recipe for the crust. This is not the most convenient crust recipe – I have to start it early in the day and break into Bob’s beer stash to make it, but it is worth it. It is by far, the best crust I’ve made so I go back to it time and again.

There isn’t an exact recipe for this. But as close as I can estimate that I did it looks like this: 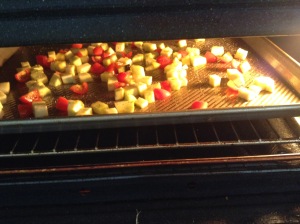 I took the eggplant and tomato, coated them in a little olive oil and seasoned with salt and pepper. I roasted them in a 400 degree oven for about 15 minutes, stirring once to make sure they didn’t burn.

For the cheese, I used 1/2 a container of ricotta (could only find 15 oz containers for some reason) and added the basil, oregano and herbed salt. Mix well.

Once the crust is mostly baked, I spread the ricotta over the crust, then topped with the tomato, eggplant mixture. I drizzled the balsamic oil over all of this and then baked for another 20 minutes at 400 degrees.

The results were good. I do think another element would work here, some kind of pesto or maybe a tomato base with the ricotta in dollops instead of as the base could add something to the dish. I did like the balsamic on this – it needed the brightness to counter the earthy eggplant and the cheese.