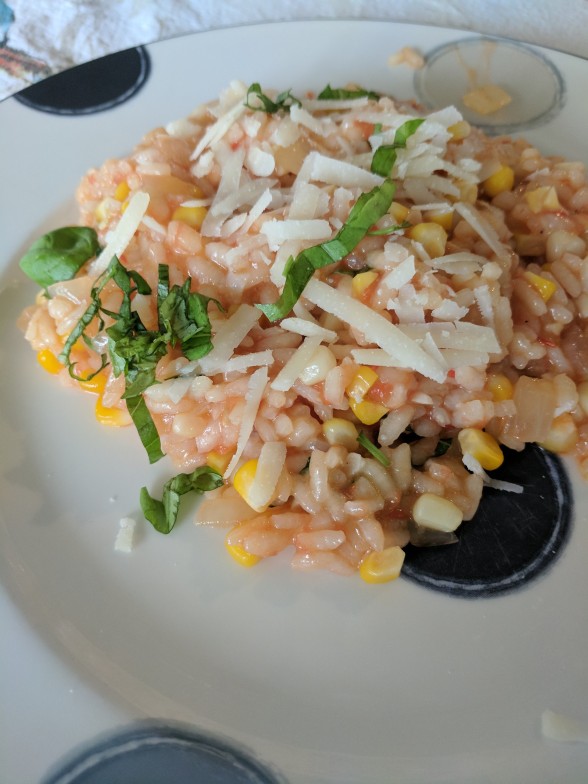 Quick – think of the flavors of summer. What foods do you identify with summer? For me it will always be tomato, corn and peach and I would guess most people have at least one of those, if not all three in their mind. So what better way to celebrate summer than have a risotto (cause it is actually easy to make and very filling and generally has leftover) with the flavors of summer. Okay, there are no peaches in this, but a nice peach salad would not be out of place here. 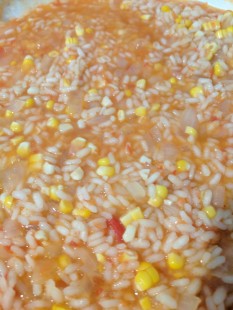 Dice the onion and mince the garlic. Pick the basil leaves and cut into small ribbons. Grate the cheese. Using the same grater, grate the tomatoes.

In a large pan, heat about a tablespoon of olive oil. When oil is hot, add the onions and cook, stirring frequently until the are soft, about five minutes. Add the garlic and cook about one minute. Add rice and toss to coat. Cook about 1-2 minutes until rice is toasty. Add tomatoes and mix well. If using, add wine and cook over medium heat until evaporated. Season with salt and pepper.

Remove corn cobs from broth. Add 1/2 – 2/3 cup broth and mix with rice/tomato mixture. Cook, stirring often, until broth is absorbed. Add broth ~1/2 cup at a time, waiting until the liquid is absorbed before adding more. Stir with each addition. Continue adding broth until rice is cooked – it should take between three and four cups of broth. As you add the last 1/2 cup of broth, add the corn. When rice is cooked and corn is heated through, remove from heat and add 1/2 of the basil and about 1/3 cup of cheese. Mix everything together well and adjust seasoning as needed.

Plate and top with more cheese and the remaining basil.

This is an Alinea (the cat) approved dish. She even joined us at the table in hopes of getting a bit for herself.

*This was adapted from a New York Times Cooking recipe.