When I made this I referred to it as “garbage” pizza because it was made with the things from the fridge that were on the verge of going bad and would need to be tossed in the garbage in a day or two. But since I had the time, I decided to make pizza. The nice thing about pizza is that is really does lend itself to what you have on hand. Very little does not taste good on pizza crust.

I based the dough on my favorite pizza dough recipe from Rick Bayless. I didn’t want to use any of Bob’s really good beer, and I didn’t have my usual cooking beer on hand so I tried a Corona and while it didn’t do a lot of the dough, it wasn’t bad. I do prefer a lager or wheat beer for this crust, but it is a case of use what is on hand.

For the toppings, I had 1 yellow squash, 1 ear of corn, 2 tomatoes (1 Cherokee purple tomato and 1 yellow tomato) and a handful of asparagus and 1 clove of garlic (seriously, I only had 1 clove of garlic in the house, which is pretty amazing since I almost always have garlic on hand.. The asparagus was looking pretty rough and I had put the tomatoes in the fridge two days before because they were going soft before I could use them. I know – never put tomatoes in the fridge as it ruins the flavor, but a sometimes you have to make sacrifices. 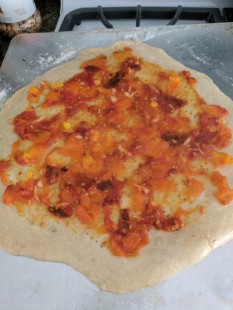 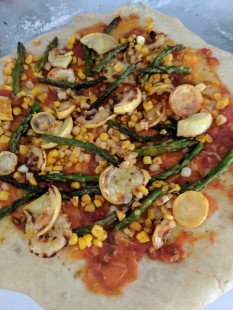 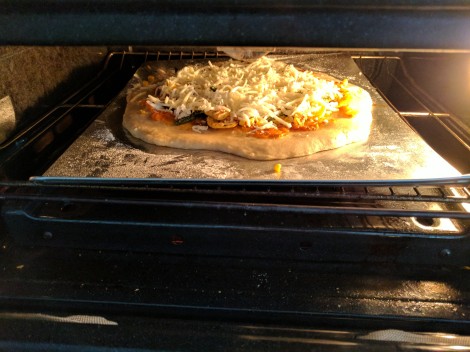 The dough is great – mix together and then let sit all day.

For the pizza, I started with chopping the vegetables and tossing them in olive oil. I kept the separated on a baking sheet as I baked them at 400 for about 20 minutes. Once the vegetables were done, I baked the dough for about ten minutes, then topped with the tomatoes and baked another five minutes. For the “sauce” I mashed the garlic clove with the tomatoes, added salt and a pinch of sugar to the roasted tomatoes/garlic before spreading it over the dough. I wanted to cut the acid just a tiny bit, but I didn’t want it to be sweet. Then the vegetables and cheese (mozzarella and pecorino mixed together) were added and baked for about seven minutes, until the cheese is melted and a little bubbly.

The best part of this was I got to clean out my fridge and had a tasty dinner for Bob and I. 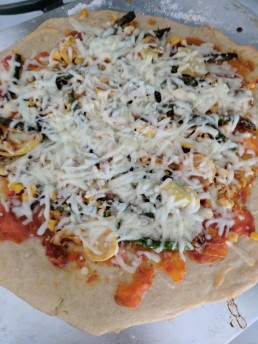