Back when I was knitting Bob’s scarf for the DC trip, I sent a picture to Suzanne and she really liked it. So, for Christmas, I knit her a scarf. Not very creative, I know, but it is fun to try new stitches and if I can knit something that someone will like I want to give it a try. Like most things I make, they aren’t perfect, but I think they are perfect enough to be enjoyed.

I started out knitting the pattern I found on Studio Knit in my test yarn. I have a bulky weight yarn with a lot of stretch to try different stitches – it was on clearance (read cheap) and it works great for practicing stitches. I did some reading on cabling and gave it a go. The test came out great and it was actually pretty easy to do.

Since this worked well I decided I could knit the scarf in a reasonable amount of time and it would be great. Bob took me to a yarn store in St. Pete where I picked up some pretty, but thinner, yarn for the scarf. Knitting is knitting and the yarn shouldn’t make that much of a difference, right? I was so wrong.

Thinner yarn (worsted weight instead of bulky) and smaller needles mean smaller stitches, which actually makes the cabling harder – at least for me it did. I must have started, messed up greatly, pulled it apart and started over about six times in the course of one weekend. I was frustrated and ready to give up when I discovered lifelines (tip number 9). This made all the difference – if I messed up (and I did) I only needed to remove the stitches to the lifeline and could keep the majority of my work. The yellow thread running though the scarf – lifeline! 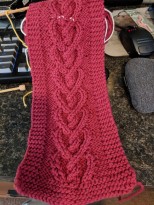 I kept at it over a few weeks and … I successfully cable knitted a scarf! I won’t mention how may times I cursed the pattern with that yarn or how many glasses of wine were consumed to ease the frustration (not as many as you would think, but definitely a few). But I discovered that I could do it, and the results are pretty nice. Persistence pays off sometimes and knitting seems to be one of them. I’m not sure I’m ready to cable again any time soon, but I know I will someday.

I have a few more projects in the works – a blanket for the guest room, an infinity scarf or two that look really sweet, a sweater for Val, and maybe a few cat blankets (I did knit one for Tigger over Christmas, so that post will be up soon) to donate to the local rescue. Yarn is super on sale right now so I’ve stocked up and hope to work on one large (blanket /sweater) project and maybe one small project (scarf/cat blanket/toy) at a time.