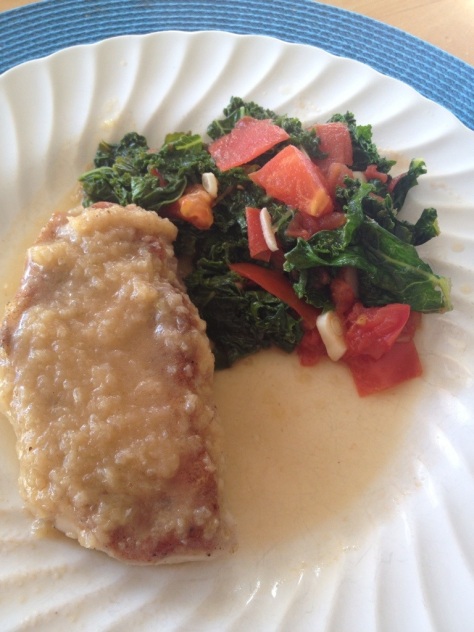 Today was another adventure in sauce making. Can you tell I have off for a few days? I went back to the cookbook and found a pan jus based sauce. Thus one called for an onion purée to thicken the sauce. So on to the vegetable purée section. Turns out to add flavor and texture to a pan sauce, a vegetable purée can be added in place of a roux or flour/cornstarch. And since I had the time … I made my first attempt at a stewed onion purée. 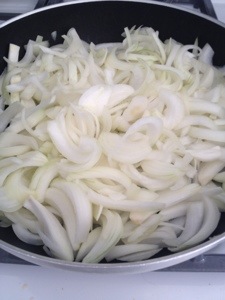 I will admit to changing the recipe a bit – even though I shopped this weekend, I did not have five pounds of onions on hand. But I used two and a half (about 4 large onions) with two pats of butter – maybe two ounces total. The recipe is pretty specific that you need to sweat the onions and do not let them brown or caramelize. (I think a carmaelized onion version of this would be fantastic and may have to try it soon.) So the onions cook down with lots and lots of stirring. I may have stopped cooking a little soon, but the onions were soft and translucent and all the liquid in the pan had evaporated. 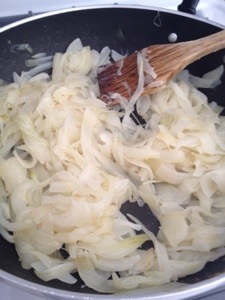 I added a quarter cup of cream, mixed it well then puréed it the blender until it was almost smooth. It looks like mashed potatoes; I did decide to not strain the mixture. I wanted to see what it was like unstrained and figured it would be easier to strain later if need be.

So the pork – one butterflied pork chop with salt, pepper and ground thyme. Into a hot pan with olive oil, and cook until done. Remove the chops, pour off the oil (I poured it into the pan for the kale and tomato) and deglaze the pan with a half cup stock. I like veggie stock, so that is what I used. Reduce and then add a few tablespoons of the onion purée. Here is where I deviate from the recipe. I added the onion purée and then a splash of whiskey. Just a small splash, but I thought it needed something. Back into the pan went the pork just to meld the flavors a little.

I really like the way this came out. Bob even declared it one of my best pork dished yet. And since I now have plenty of the onion purée in the freezer (in individual portions like I did with the leftovers of the broken sauce from yesterday) this is a quick weeknight meal now.

After all these meat dishes lately, I think tomorrow will be a tomato and leek quiche -crustless that is.